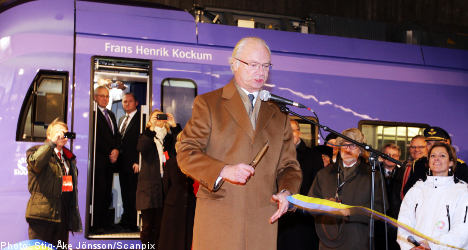 “Ten years ago, the Öresund Bridge was opened. Today, it is obviously possible to live on one side of the sound and work on the other side. The City Tunnel further contributes to this integration and establishes even closer ties between the countries,” the King said in a statement on Saturday.

The City Tunnel is a 17-kilometre railway connecting three stations in Malmö with the Öresund bridge. At the same time, it also links the Skåne rail network and increases capacity for future railway traffic. A total of six kilometers consists of a tunnel under central Malmö.

“The City Tunnel is an important piece of the puzzle for the continued positive development of Malmö and the entire Öresund region and an important project for the whole country,” said Malm.

“As head of the Transport Administration, I am of course also delighted that the project is well ahead of schedule and at a lower cost than the budget,” he added.

The opening ceremonies included performances by a number of artists from Skåne, including Marie Fredriksson of Roxette and Timbuktu, and ended with the push of a button by the King, which launched a fireworks display of lights from the stage.

The King and over 400 invited guests took a premiere tour of the City Tunnel by train. The train stopped at Triangeln and Hyllie, where the King officially opened the two stations. The tour ended with dinner for the guests at the new Glashallen at the new underground Malmö Central Station.

The City Tunnel has now been handed over to the Transport Authority and the city Malmö, which will operate the facility and its railway stations. The tunnel begins regular operations on December 12th and trains will run according to a timetable through the City Tunnel.

From Sunday to December 10th, the public has the chance to test run the City Tunnel and have a look at the new Malmö Central, Triangeln and Hyllie stations.

There was a 6km queue after Pentecost on May 24. Photo: Johan Nilsson/TT/Scanpix
Copenhagen police reported the queue in a tweet at around 8am on Tuesday.

The temporary border checks on the small artificial island of Peberholm (Pepparholm in Swedish), where the bridge over from Sweden turns into a tunnel, makes it much slower to get across the Öresund, meaning queues build up quickly whenever there is heavy traffic.
“The police are in place and are trying to get people through the checks as quickly as possible,” security officer Thomas Hjermind told Ritzau at 9am. “The queue is 2km long. But the traffic is moving.”
The long weekend around Whit Sunday and Whit Monday in Denmark has meant that many have travelled into Sweden — some to get the ferry across to Bornholm, others to stay in summer cottages in Skåne and elsewhere.
Police told Ritzau that the queue was mainly formed of Danes on their way back from holiday in Sweden, together with a few Swedish cross-border workers.
READ ALSO:
Since Denmark imposed border controls on March 14, Danes have been able to travel to Sweden unhindered while Swedes have only been allowed into Denmark if they have a “worthy purpose”.
Danes are supposed to go into quarantine for 14 days on their return, but this is voluntary and it seems that few do.
Last Friday, Denmark's government announced that it was ready to allow tourists from Norway, Germany and Iceland into the country, but not those from Sweden.
“It seems absolutely crazy. Total double standards,” Christer Mårtensson, 61, from Hjärup in Skåne told Denmark's BT tabloid.
“If the authorities are so afraid of the Swedes being infected don't they think that the Danes can take the infection back with them?” he added.
“It doesn't make sense. It's pure populism, and it seems as if Mette Frederiksen is just trying to improve her popularity on at home.”
While Sweden as a whole has higher infection rates than Denmark, Region Skåne has a lower rate
than in Copenhagen area.
According to Sweden's Kvällsposten newspaper, there have been 17.8 coronavirus-related deaths per 100,000 inhabitants in Copenhagen, and just 13.3 in Skåne.
SHOW COMMENTS
Url copied to clipboard!