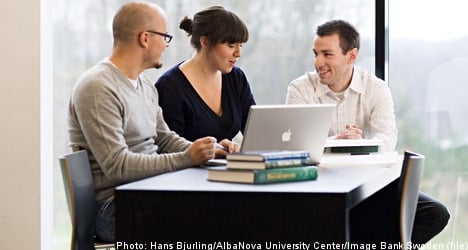 “The high graduation age is a problem if it leads to decreased employment or to a reduction in productivity among the employed. The latter may be the case if students work before or during their studies, but are less productive than after completing their studies,” the report said.

Currently, the average Swede graduates from post-secondary education at 29, second only to Iceland among OECD countries, the report said.

In Germany and Norway, the average graduate completed his or her studies two years ahead of Swedes and in the Netherlands, about four years faster, according to a long-term government study.

The reason behind the relatively late Swedish graduation rate is not that Swedes take a long time to complete their studies, but because they start late, with the median age of enrollment at over 22, the report said.

Of the 250,000 kronor that could be saved by lowering the average graduation age by a year, 80,000 kronor would go back to the student and about 160,000 kronor to society at large.

“The reason for this is that those who graduate later on average receive more transfer payments and a progressive tax system means that part of the income gains from an early graduate goes to society in terms of tax revenue,” DI reported on Friday.

The government recommends intensified counseling in high school and extra points in the admission process for those who choose to quickly continue into higher education.

Another proposal suggests granting universities and colleges more funding for students who graduate on time, the report said.