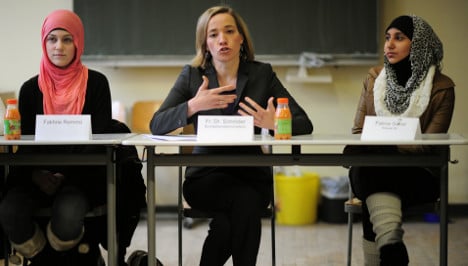 The minister told daily Wiesbadener Kurier that while discrimination and disadvantage were partly to blame, there were also religious and cultural roots to this propensity to violence, which was revealed in two studies commissioned by her ministry due to be released on Friday.

“We must not construct any false taboos here: there is a macho culture among young Muslim men that glorifies violence and which also has cultural roots,” she said. “The tendency towards violence among young, male Muslims is clearly higher than among non-Muslim, native youths,” she said.

It stemmed from perceived slights upon their honour, which they defended with violence, Schröder said.

“Social disadvantage and discrimination are important factors, but they are not sufficient as an explanation,” she said. “There is a co-dependence between religiousness, macho norms and tendency towards violence.”

Her comments came amid an ongoing debate about immigration, integration and Islam in Germany. Former central banker Thilo Sarrazin kick-started the issue with the publication of his book, “Abolishing Germany – How we’re putting our country at jeopardy,” which argued partly that Muslim immigration was dragging Germany down.

Chancellor Angela Merkel later declared that multiculturalism had “failed utterly,” while Bavarian Premier Horst Seehofer went so far as to suggest immigration from Muslim countries should be stopped.

Schröder indicated that discussion of the issue had been hampered by political correctness. Religion was part of culture and culture shaped behaviour, she said.

“If someone made an issue of the disproportionate tendency to violence among young Muslims, it was always said that this was a blanket judgement. But that’s not the case,” she said.

It was also striking that there was a growing hostility towards Germans being reported, she said.

“German children are not infrequently bullied in schools just because they are German. We must put up with that no longer,” she said.

Schröder called for stronger efforts for the education of Islamic religious leaders in German universities – something the federal governments has already embarked on by creating university courses for Imams.

“We have to make those who shape values in the Muslim community responsible. That is first of all the Imams,” she said. “Then another picture of society, of the roles of men and women and of violence, would soon be communicated in the mosques.”