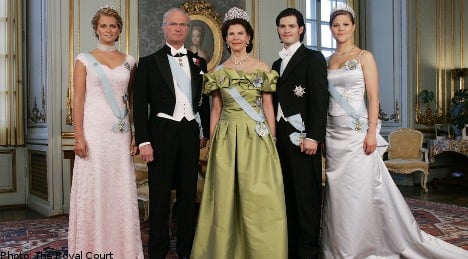 A Demoskop poll published in the Expressen daily on Tuesday showed that 69 percent of respondents said that Sweden should continue to be a monarchy. The survey questioned 1,381 Swedes from November 13th to 17th.

The result is an increase from the 63 percent support polled in the spring ahead of Crown Princess Victoria’s wedding to Prince Daniel on June 19th. The previous measurement was conducted on April 21st with 615 interviews.

On both occasions, respondents were asked, “Do you think that Sweden should continue to be a monarchy with a king or queen as head of state or should we become a republic with a president as head of state?”

The unofficial, tell-all biography “Carl XVI Gustaf – the reluctant monarch” (“Carl XVI Gustaf – Den motvillige monarken”) went on sale on November 4th, providing details of wild parties and affairs with young women. It is the first book of its kind in Sweden.

Among the more lurid revelations in the book was an alleged year-long love affair with Swedish singer and model Camilla Henemark, born to a Nigerian father and a founding member of the band Army of Lovers.

Despite worries that the book would damage the royal family and confidence in the monarchy, it appears the opposite is the case, Expressen reported on Tuesday.

“There is no doubt that support for the royal family strengthened after the wedding. However, no wedding in the world could have saved the King and his popularity if it were not for him. The Swedish people’s new record support says it in clear language: The King, you did it,” Johan T Lindwall, the newspaper’s court reporter concluded.