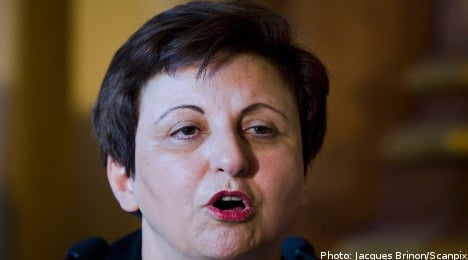 Nobel Peace laureate Shirin Ebadi on Monday accused Swedish telecoms giant Ericsson of aiding monitoring in Iran, and encouraged members of the Iranian diaspora in Sweden to protest to the company.

“I am urging you Iranians in Sweden to please email Ericsson and object and say, ‘Why are you selling the Iranian government software with which it can control its people’,” the Iranian lawyer and human rights activists said.

Ebadi, who was speaking at Stockholm University, said Ericsson had entered dealings with the Iranian government similar to those Nokia Siemens previously had, alleging the company sold Iran software that allowed it to monitor text messages and mobile phone calls.

Ebadi also blasted European satellite operator Eutelsat for giving into an Iranian demand and removing the Persian-language BBC and Voice of America channels from a satellite broadcasting to Iran.

“So in fact, Eutelsat cooperated with the Iranian government in the sphere of censorship,” she told the crowd.

“We urge the West, please do not enter in any trade deals with Iran, do not help the Iranian government, it is repression and censorship of its people,” she said.

Ebadi was awarded the Nobel Peace Prize in 2003 for her efforts for democracy and human rights.

She has not returned to Iran since she left on the eve of the June 12, 2009 poll, which gave President Mahmoud Ahmadinejad a second term amid widespread allegations by his opponents of voting fraud.