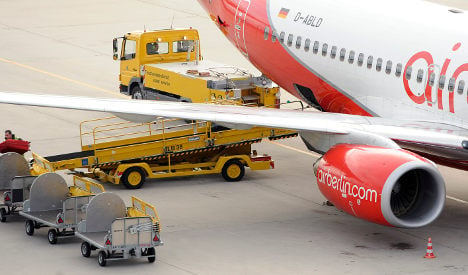 He is charged “with smuggling a suspected explosive device into the airport…and placing it in a navigation facility at the airport, which contravenes the civil aviation law of Namibia and for interfering [with] operations at the airport and an air carrier,” Kandjumbua said.

Shafuda was arrested on Friday. Magistrate Frans Anderson said Shafuda’s case would be postponed until next month.

“I hereby postpone the case to December 9, and you are entitled to a lawyer and can apply for bail within the next few court days,” magistrate Frans Anderson told the 51-year-old Shafuda at the Katutura magistrate court in the capital Windhoek.

“Until that time you shall remain in custody,” Anderson added.

After the brief proceedings, Shafuda was escorted by eight special unit police officers out of the court room.

Reporters were prevented from photographing him outside the court as he was whisked away in a police van with tinted windows.

German federal police last week said that the suspicious item, a laptop bag wrapped in plastic, had been seized by Namibian police and that a subsequent X-ray revealed batteries that were attached with wires to a “detonator” and a ticking clock.

The Air Berlin plane with 296 passengers and 10 crew members on board was delayed six hours before being cleared for take-off to Munich, where it later arrived safely.