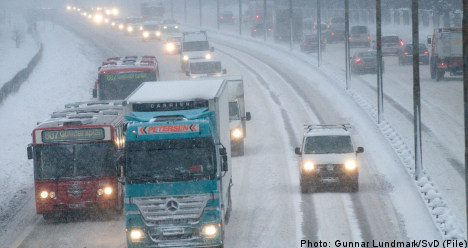 A class 1 warning covers the rest of southern Sweden up to Östergötland County as well as most of the Swedish coastline.

“The snow looks like it will continue into Wednesday in many parts of eastern Götaland and eastern Svealand,” meteorologist Sten Laurin told the TT news agency.

“You can count on things being difficult in these regions.”

The winter storm stems from a collision between cold air from the north and a system of rain showers from the southeast, which results in heavy snowfall.

SMHI issues class 2 warnings for weather believed to be dangerous for the general public.

The cold air is expected to remain over Sweden for the next week and a half, with daytime temperatures not likely to creep up above -5C degrees as far south as Skåne.

Strong winds are also expected to accompany the weather system, resulting in windchill effects that make the air feel even colder than recorded temperatures.

“So it’s time for both gloves and hats, I’d say,” said meteorologist Laurin.

In areas covered by the class 2 warning, SMHI expects between 15 and 20 centimetres of snow, with winds gusting up to 70 kilometres per hour likely to cause blowing and drifting snow as well.

Meteorologists also expect between 10 and 15 centimetres of snow to blanket much of Östergötland, Halland and large parts of Västra Götaland in the next 24 hours.

According to the Swedish Transport Administration (Trafikverket), road conditions on a number of motorways across Sweden have already deteriorated due to the winter weather.

The agency is preparing a fleet of 600 vehicles to clear snow from roadways in Kalmar, Kronoberg and Jönköpings counties.

“People should really think about whether they need to go out, or make sure they leave plenty of time and have the right tyres,” Transport Administration spokesperson Tobbe Lundell told TT.

While the weather has yet to cause any trouble on the Swedish rail network, Lundell warned that train journeys may take more time than usual.