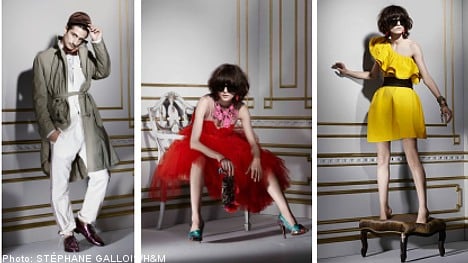 The allure of a top fashion name and the reach of a global chain: the Paris couturier Lanvin this week rolls out a line for H&M in the latest of a string of holiday-season flings between high fashion and high street.

Fashionista hordes are expected to mob outlets of the Swedish retailer as Lanvin’s collection goes on sale in 200 stores worldwide on Tuesday, after a pre-launch Saturday in the United States and Canada.

For the fashion consultant Jean-Jacques Picart, operations like this one are “in step with the times.”

“Since the 1990s, women have been playing pick and mix between high fashion and budget clothes. Not just following the diktats of designers.”

H&M first experimented with the formula in 2004, with a tie-up with Karl Lagerfeld that lifted monthly sales by a quarter, and the world’s third-largest fashion group has not looked back since.

Since then it has hooked up with the likes of Stella McCartney, Viktor and Rolf, Comme des Garcons, Jimmy Choo and Sonia Rykiel — on top of one-off lines with style icons Kylie Minogue or Madonna.

The chain says it wants to “move beyond its core concept of quality fashion at the best price, to make so-called ‘luxury’ fashion available to the greatest number.”

And so far, H&M says the customer response has been “euphoric” — though it will not release detailed sales figures.

Working with designers is also a way for the chain to shed the image of fashion copycat, positioning itself instead as a partner of high fashion.

Elbaz says he was initially reluctant to design for a retailer, but was “intrigued” by the idea that H&M could adapt to the codes of the luxury world.

But for couturiers, whose exclusive brands are a vital asset, there is more danger involved in associating itself with the high-street, says Picart.

“The risk exists, although in this case the clothes I have seen are in keeping with the Lanvin spirit.”

For Picart, high-street tie-ups make most sense for diverse luxury brands that sell everything from couture clothes to lipstick — like Lanvin which is betting on strong Christmas perfume sales this year.

“If you don’t have any spin-off products to sell there isn’t much point,” he said.

“For sure, this is going to introduce a new category of women, who neither buy Elle nor Vogue, to the work of Alber Elbaz. It can be a great booster in terms of popularity.”

“But the people buying Lanvin at H&M are not going to buy regular Lanvin three months from now. They can’t afford it. The speculation is all on the perfume sales.”

From the consumer’s viewpoint, however, the benefit is clear: a chance to sample a designer label for a tiny fraction of the cost.

Lanvin made a splash at Paris Fashion Week this October, with long pleated skirts that swirled and spun around body-hugging tops — but a humble jersey draped dress from its website will set you back a tidy $1,225 apiece.

With H&M, Elbaz designed cocktail dresses with rose-patterning or yellow frills and sharp-tailored black or purple party frock numbers, with a democratic price tag of €99 to €149 ($149 to $199).

Looking past the hype, is all this changing the face of fashion?

“It’s a marriage compared to a fling,” he said. “But working with a top designer, meeting their standards on a daily basis, is a difficult exercise — for any large industrial group.”

PARTNER CONTENT
‘I’m no longer afraid of failure’: the European MBA to help you conquer your fears

PARTNER CONTENT
VIDEO: My Parisian life: working in ‘the heart of the luxury industry’
Url copied to clipboard!