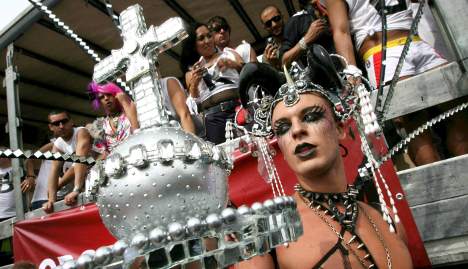 Probably not welcome in the Church - a pride marcher in Rome. Photo: DPA

Theologian David Berger, was correspondent professor for the Pontifical Academy of St Thomas Aquinas in the Vatican, where he said his academic work was watched and censored where it concerned homosexuality.

As a gay man himself, he told Der Spiegel in an interview that living among the Catholic homophobia was a nightmare.

“It must be acknowledged that a large number of Catholic clerics and trainee priests in Europe and the United States are homosexually-inclined,” he said.

He said when he was writing for theological magazines, he had to use phrases such as fornication-partner rather than life-partner, and that the neutral word homosexual could not be used, but gay men were described as perverse sodomites.

“The worst homophobia in the Catholic Church comes from homophile priests, who are desperately fighting their own sexuality,” he said.

“Obviously, those who follow their urges are repudiated more fiercely when one is so painfully repressing that disposition oneself.”

Now working as a teacher in Cologne, Berger outed himself as gay this April after the Bishop of Essen Franz-Josepf Overbeck described homosexuality as perverse and a sin during an appearance on a television chat show.

Berger’s book about his experiences within the Church The holy illusion – a gay theologian in the Catholic Church which is published this week.