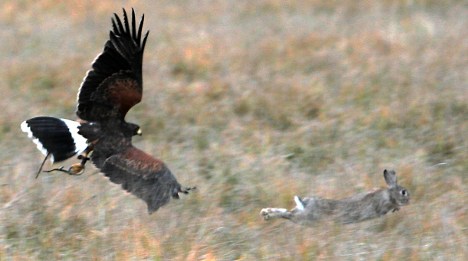 Some flower beds which were planted with bulbs and should be ready for overwintering resemble newly-ploughed fields, said Rainer Berger, head of the garden section of the Bundesgartenschau (BUGA 2011).

“We have a big problem with rabbits which are eating up the freshly-planted flower bulbs,” he said.

“Actually we have ourselves made sure that the rabbits get lots to eat,” he admitted. Thousands of bulbs have been planted already, so that they flower at the right time for the show. Berger said they were worth around €80,000.

Now local falconers are being brought in to let their buzzards patrol the area from the Koblenz castle.

Edgar Helinski has already brought his American desert buzzard into service. “The animal is perfect for the job. It knows all about hunting rabbits from the wild.”

He admitted that it might seem brutal, but said that rabbits are the natural prey of such birds as his.

Yet the rabbits may be getting wise to the aerial attack strategy – his trained buzzard has a small bell tied around its neck, which could be serving as a warning for the rabbits.

“It has already happened that we stood here for hours and there was no rabbit to be seen,” said Helinski.

Those bunnies which are wise to the buzzards need to watch out for Freddy though – the BUGA has brought in a tame ferret to weasel out those hiding in the bushes.

Berger said both prongs of attack would be continued for the next few weeks – until the end of the hunting season at the end of February if need be – to try to ensure the garden show blooms properly.