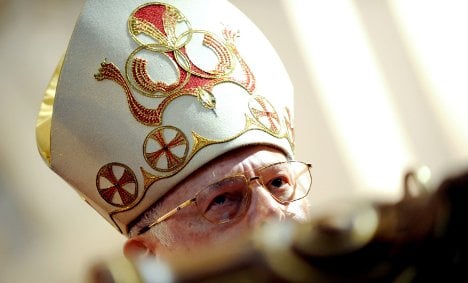 Cardinals from around the world are due at the unprecedented gathering at the Vatican to review the Church’s response to molestation cases. In recent months there has been a deluge of such cases, particularly from the pope’s home country.

Archbishop Robert Zollitsch, chairman of the German Episcopal Conference, announced in September that Germany’s Roman Catholic Church was preparing to provide payments to victims of sexual abuse by its priests.

However it has not yet decided how much to offer, with critics accusing German Church officials of dragging their feet for years after major compensation deals were agreed in countries such as the United States and Ireland.

“They have not made a single official offer,” said lawyer Manuela Groll, who represents around a dozen plaintiffs, all of around fifty years old, who say they were victimised by Church priests as youngsters.

“Now we need to find out how much we think a shattered life is worth.”

But Catholic leaders here have rejected the notion of a sliding scale, a path taken notably by the Church in Austria.

The onslaught of revelations began in January when it emerged that priests at Canisius, an elite Jesuit school in Berlin, committed dozens of sexual assaults on pupils in the 1970s and 1980s.

“Apologies are not enough. We need a symbolic gesture that recognises the suffering,” school rector Klaus Mertes told AFP this week, when asked about the issue of compensation for victims.

The Church in Germany has admitted it failed to investigate claims of abuse properly and that some cases had been covered-up, with paedophile priests simply moved elsewhere instead of being disciplined or reported to the police.

Benedict himself has faced allegations that when he (as Cardinal Joseph Ratzinger) headed the Vatican morals watchdog, and earlier as the archbishop of Munich, he failed to act against predator priests.

Authorities have opened several investigations, although in many cases the abuse is said to have occurred decades ago and thus falls under the statute of limitations, or the alleged perpetrators have died.

Since the emergence of hundreds of cases — the Church has not provided an official estimate of their number — Catholic leaders have announced measures to contend with future instances of abuse and step up prevention efforts.

In March, the German Church launched a telephone hotline for abuse victims, which has already received more than 3,500 calls.