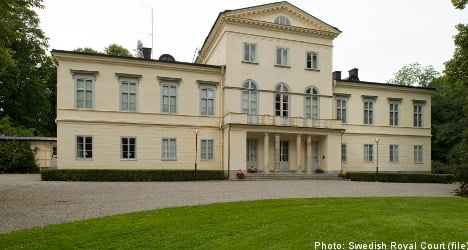 “They’ve been looking forward to this for a long time,” Royal Court deputy spokesperson Annika Sönnerberg told the Aftonbladet newspaper.

Haga Palace was long the home of several members and generations of the Swedish royal family and the site where King Carl XVI Gustaf was born in 1946.

“It was here that our present King spent his first year with his sisters and parents, Crown Prince Gustaf Adolf and Princess Sibylla,” the Royal Court wrote in a statement on Monday.

The King and his family stayed in the residence until the sudden death of his father in a plane crash at Copenhagen Airport in 1947.

Built from 1802 to 1805, the palace served as the home or summer home for several generations of the Swedish royal family until 1966, when the King’s grandfather then-King Gustaf VI Adolf transferred its disposal to the government.

For over 40 years, the site served as an official residence for distinguished foreign guests, although it was sparsely used for the purpose. In April 2009, Prime Minister Fredrik Reinfeldt transferred the rights of disposal back to the royal court as a wedding gift for Daniel and Victoria, who were married on June 19th.

“The decision came on the government’s initiative and meant that the castle was returned to the King’s disposition. It also made it also possible for the Crown Princess to occupy the castle,” the Royal Court explained.

Since their wedding, Daniel and Victoria embarked on a six-week honeymoon to the South Pacific and the US, followed by official state visits to France in September, China in October and Finland earlier this month, in addition to domestic duties since August.

Attempts by The Local to reach the royal court on Monday were unsuccessful.