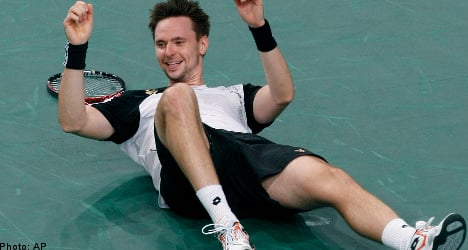 Söderling also beat Monfils at a tournament last week in Valencia, Spain. He became the first Swede to win a Masters tournament since Thomas Enqvist’s success in Cincinnati in 2000.

France’s Gilles Simon, Switzerland’s Stanislas Wawrinka and American Andy Roddick were Söderling’s other victims and he replaces the UK’s Andy Murray as the world number four, his highest-ever ranking, on Monday.

Söderling said the victory would boost his confidence ahead of the season-ending ATP World Tour Finals for the world’s top eight players in London later this month.

“I’m going in the right direction. Now my aim is to be number three [in the world]. This fills me with confidence for London. You have to play all the best players and each match is potentially a Grand Slam final. So you need enormous confidence. This could be one of the keys,” said Söderling.

He also had words of praise for his opponent.

“I know it’s difficult to lose two finals in a row in this city, but Monfils played incredible tennis this week,” said Söderling, who was beaten in the Roland Garros final on the other side of Paris in 2009 and 2010.

“He beat Roger [Federer] yesterday and I also know how difficult that is,” he added.

About his win, he said, “It’s a great feeling. I don’t have a great ratio in finals [six wins and 10 defeats] and notably here in Paris. I’m happy with the way I played. I was extremely nervous before this final. I hardly slept last night. I really wanted to do well.”

Monfils had also experienced an unforgettable week in eastern Paris, having saved two match points in the third round against Spain’s Fernando Verdasco and five against top seed Federer in a roller-coaster semi-final on Saturday.

The Frenchman appeared fatigued by his efforts to overcome Federer, however, and was badly off the pace in a one-sided first set, with Söderling’s powerful serve causing him particular problems.

Söderling won 6-3, 6-2 when the pair met in Valencia last week and although his service was less reliable in the second set, the Swede continued to pepper his opponent with precise groundstrokes from the back of the court.

Monfils never managed to shake Söderling out of his rhythm and went down meekly in the tie-break, as the Swede clinched a straightforward victory with a passing volley at the net before dropping to the ground in ecstasy.

“I’ve had a week full of emotions,” said Monfils, who will lead the French team that takes on Serbia in the Davis Cup final in Belgrade on December 3rd to 5th.

“I’ve learned a lot, I’ve gone to the extent of my limits and I’m very, very disappointed to have got so close again and to have lost the final so easily. But third time lucky, I hope to be in the final again next year,” he added.

PARTNER CONTENT
Have an impact: five ways to shape a better world in 2022

PARTNER CONTENT
‘I’m no longer afraid of failure’: the European MBA to help you conquer your fears
Url copied to clipboard!