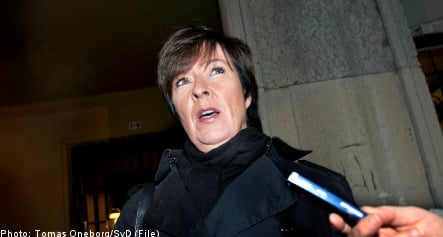 “We have a common view that we should hold the congress as quickly as practically possible,” party secretary Ibrahim Baylan told the TT news agency following two telephone conferences held on Friday.

The party’s district representatives and then district party chairs each participated in their own respective telephone conferences on Friday afternoon to discuss when the Social Democrats should hold an extraordinary congress.

Previously, Sahlin has spoken of holding the meeting in May or June, but the general perception is that the timetable needs to be moved up to minimize runaway speculation about the party’s future leadership.

According to Baylan, the most likely date for the Social Democrats’ extra congress will be sometime in late-February or early-March, although the exact date won’t be decided until the party governing board meets on December 3rd.

“I’m no longer 100 percent sure she should remain,” Winberg told the Aftonbladet newspaper.

“Sahlin led the party into a catastrophe but she wasn’t alone, that’s important to say. But a leader has a huge responsibility; they chose their colleagues and those who are supposed to back them up.”

Winberg cited Sahlin’s decision to call for current party board and executive committee members to resign as one of the reasons for her current doubts.

Eric Sundström, editor of the progressive news website Dagens Arena, has strong ties to the party and was also critical of Sahlin’s move.

“It would have been a good decision if it had happened voluntarily and a lot sooner, rather than being forced,” he told The Local.

He attributed much of this week’s chaos within the Social Democratic leadership to a lack of direction and clarity within the party about what to do next.

“They’ve been trying to buy time and they’re not really sure about what they should do” following the party’s worst election since 1914, said Sundström.

Nevertheless, he thinks Sahlin has enough support within the party to continue as leader.

“But she needs to send a clear signal that she is up for the challenge and that she has a plan,” said Sundström.

Also working in Sahlin’s favour is the lack of a credible alternative.

“The party hasn’t done a good job of identifying and developing talent,” he said, explaining that many of the party’s younger members who developed talent in the private sector and outside the party apparatus have had a hard time breaking through and gaining recognition by party colleagues.

Sundström believes the Social Democrats have a lot of work to do to replenish their leadership ranks.

“There’s no easy way out of this,” he said, citing the make-up of the party’s nominating committee as a first important step in determining the party’s future.

Preparations for putting the nominating committee began this week and are being led by Baylan, who was nevertheless reluctant to say whether or not he had any suggestions for who should chair the committee.

Whoever is named as chair of the nominating committee will have a central role in shaping the party’s future leadership.

According to TT, party insiders want to see Lena Hjelm-Wallén chair the committee, but others in the party are against the appointment because Hjelm-Wallén was responsible for putting Sahlin and other current top party bosses in power.