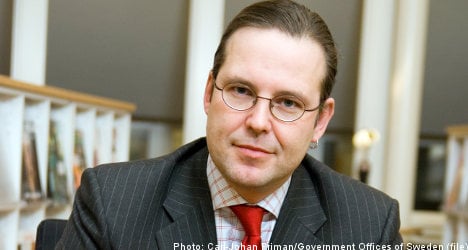 Although Borg did not mention anyone by name, he singled out the ideas that German Chancellor Angela Merkel’s government has put forward.

“We had a stabilisation in the market. However, after the statements that were made in connection with the last European Council, these problems came back,” Borg said on Friday.

Borg is especially concerned that private lenders such as banks may have to take a hit if eurozone countries with strained public finances such as Ireland are forced to suspend payments and ask for help.

“There have been individual member countries that have also publicly pursued the line that debt restructuring is on the agenda. I think that it has been an unfortunate thing. It remains a heavy responsibility on those who are initiating this discussion to ensure that it is resolved in a way that we regain stability,” said Borg.

In principle, it may come across as reasonable for private investors to write off the debts if eurozone public finances collapse so that taxpayers do not shoulder the entire burden, according to Borg. However, such a discussion is premature.

“This is an essential discussion that is best to bring up when we have a concrete proposal in place to present. If we bring up the discussion before we have a proposal, we contribute to creating market uncertainty and that I think in this case has contributed to getting into these pressing problems,” he said.

According to Borg, it is also crucial that the Irish government is capable of managing a credible reorganisation policy with budget constraints.

“It is now about us creating clarity about what will happen in the short term so that we can contribute to the stabilisation of the situation in Ireland,” he said.

Ireland has not yet applied for emergency financial assistance from the EU, said a spokesman for the European Commission at a press conference in Brussels, according to Reuters on Friday.

The statement was made in light of rumours on the financial markets that an aid package of €80 billion euros ($109.13 million) has already been decided on and should be announced next week.

The consequences of the new wave of rate worries in the eurozone could, if they continue, quickly push up Swedish mortgage rates, according to Pär Magnusson, chief Nordic analyst at the Royal Bank of Scotland (RBS).

The anxieties deal with a similar risk premium that hit the market after former investment bank Lehman Brothers went under in September 2008.

Underlying upward pressure on mortgage rates has already built up in the autumn as a direct result of Sweden’s central bank, the Riksbank, substantially reducing the volume of its cheap credit to the banks in the form of so-called repurchase agreements.

However, a new external shock is looming and may hit quickly, warned Magnusson.

“Even rock-solid investments such as Swedish mortgage bonds have taken an undeserved beating in the panic that has taken a hold of this. It is not about the creditworthiness of Swedish banks. It is purely a risk-shock effect,” he explained.

The court in Karlsruhe ruled on two challenges, one submitted by a former founder of the far-right AfD party, and the other by a businessman.

They argued the fund could ultimately lead to Germany, Europe’s biggest economy, having to take on the debts of other EU member states on a permanent basis.

But the Constitutional Court judges ruled the EU measure does not violate Germany’s Basic Law, which forbids the government from sharing other countries’ debts.

The judgement noted the government had stressed that the plan was “intended to be a one-time instrument in reaction to an unprecedented crisis”.

It also noted that the German parliament retains “sufficient influence in the decision-making process as to how the funds provided will be used”.

The judges, who ruled six to one against the challenges, did however express some reservations.

They questioned whether paying out such a large amount over the planned period – until 2026 – could really be considered “an exceptional measure” to fight the pandemic.

At least 37 percent of the funds are aimed at achieving climate targets, the judges said, noting it was hard to see a link between combating global warming and the pandemic.

They also warned against any permanent mechanism that could lead to EU members taking on joint liability over the long term.

Berenberg Bank economist Holger Schmieding said the ruling had “raised serious doubts whether the joint issuance to finance the fund is in line with” EU treaties.

The court had already thrown out a legal challenge, in April 2021, that had initially stopped Berlin from ratifying the financial package.

Along with French President Emmanuel Macron, then chancellor Angela Merkel sketched out the fund in 2020, which eventually was agreed by the EU’s 27 members in December.

The first funds were disbursed in summer 2021, with the most given to Italy and Spain, both hit hard by the pandemic.