There is no doubt that Swedes love the sun. In the summer, Swedes soak up the rays at home, in city parks and quiet islands.

In the winter, Swedes flock to exotic beaches in Thailand and Mallorca to chase a golden glow.

However, the allure of Swedes’ sun-kissed colour is that it usually comes naturally. In a country that doesn’t see too much sun for much of the year, it is alarming that a few weeks enjoying the outdoors can lead alarming increases in skin cancer rates.

Is there another reason behind the spike in cancer rate? Could it be that Swedes still fake and bake?

This past year, quite a controversy stirred up about Sweden’s use of tanning beds. Over half of the country’s municipalities, around 55 percent, have tanning beds available at the public gyms and pools.

Sweden’s Department of Environment and Radiation Safety Authority (SSM) has been avidly working to curb solarium use by recommending stronger regulations and limited use.

The Solari Association predicts that the tanning bed industry will take a hard hit financially due to the government pressure. Estimates claims that the industry’s turnover has already fallen by at least 30 percent since last summer.

Peter Bergh, branch manager of Solari Association told the Dagens Nyheter (DN) newspaper that “Bankruptcies have begun, and there will only be more.”

So, despite the negative press and bad side effects, are Swedes still tanning? The general consensus seems to say no, that tanning beds are simply out of fashion.

Mareike Nuemann, of The Local’s Style in Sweden blog, says, “Going to the solarium three times a week with the result that the skin tone becomes orange will definitely look cheap.”

Once coveted, tanning beds are now a symbol of poor taste and low self esteem. Swedes are proud of their healthy life styles and their natural, carefree beauty. Thus a trip to solarium is hardly something to brag about.

“I don’t know anyone who goes tanning, or at least who would admit to it,” explains 24-year-old Elisabet Olme.

“I suspect one friend of mine might go, he is always so perfectly bronzed, but he would never, ever tell me. I think maybe teenage girls who don’t know any better still go, and those horrid older, orange ladies, but I myself would never go tanning.”

So if tanning beds are such a faux pas, why do Sweden’s cancer rates keep rising? Are Swedes secretly sneaking into tanning beds? Research suggest that perhaps Swedes may have a hard time shaking the habit of lying down under the lights.

According to Steve Feldman, a professor of dermatology at the Wake Forest University Baptist Medical Center, tanning beds are not only cancer inducing, but addictive.

The ultra-violet (UV) radiation emitted by tanning beds produces endorphins in the human body which, in effect, gets solarium users high. And addictive behaviour can be hard to break.

The Radiation Safety Authority, therefore, has its work cut out for it when it comes to curbing Swedes’ need to tan. And hopefully, people will finally catch on and realise that frequent trips to the solarium are no alternative for catching rays the natural way, albeit in moderation. 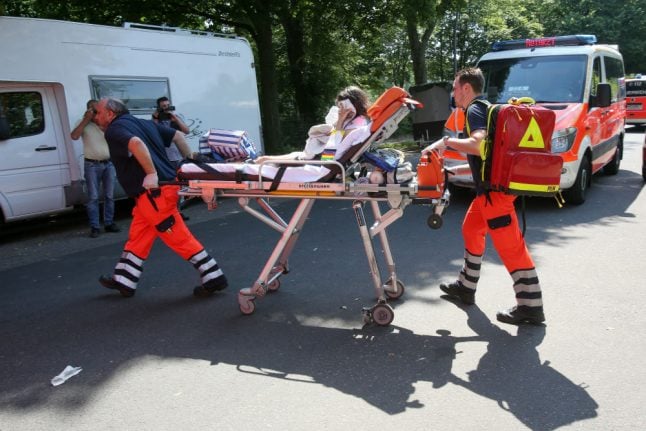 One of the pupils in Hamburg being taken to an ambulance vehicle. Photo: DPA

Some of the pupils had already completed competitions in long jump and shot put by the time the emergency workers arrived. An 800-metre race meant to take place in the blazing sun at noon was cancelled due to two school kids complaining of breathing problems.

Not long afterward, several other children between the ages of ten and twelve collapsed in the changing rooms, according to broadcaster NDR. A total of nine children were admitted to hospital as a precautionary measure over circulatory problems.

The school management later publicly apologized. In Hamburg, the schools themselves – not the school boards – decide whether events can take place even in high heat.

A spokesperson from the local fire brigade said that 47 rescue workers had been deployed to the track and field event, adding that the temperatures of around 30C combined with physical exertion were the cause of the pupils’ circulatory problems.

For the Hanseatic city, Tuesday was thus far the hottest day of the year. In the central quarter of Veddel, the mercury reached as high as 33.7C.

This surpasses the peak nationwide figure of 33.3C recorded by the German Weather Service (DWD) on Monday in the town of Genthin in Saxony-Anhalt.

“This has been the warmest day of the year to date,” said a DWD spokesman on Monday.

Elsewhere across the country, the hot, summer-like temperatures meant that thousands of pupils in Lower Saxony were let off from school early on Tuesday, reported Focus Online.

In the district of Lüneburg alone, more than 2,000 school kids were allowed to return home earlier on Tuesday, most of them from 11.30 am.

In the district of Bentheim on the border with the Netherlands, several students were allowed to return home early the previous day.

The decision on whether pupils can be let off school early due to excessively hot weather (referred to as Hitzefrei in German) is made on a case-by-case basis by the school principal if he or she believes the heat significantly impairs the learning environment.

Hitzefrei can only be called for pupils up to the tenth grade, meaning that older pupils and vocational students must remain in school until their last lesson.

The extreme heat is forecast to continue into the weekend. According to the DWD, in some German regions maximum temperatures could reach 33C on Friday and up to 29C on Saturday.