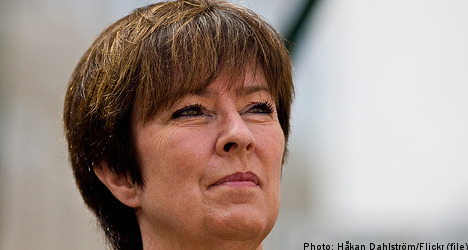 The independently liberal Dagens Nyheter (DN) daily writes on its leader page that responsibility for the party’s dismal election results is creeping closer to Sahlin.

“Mona Sahlin probably knew where things were heading. So instead of gradually being forced to retreat and finally giving in she on Wednesday afternoon, instead made the demand her own. In so doing, she thus opened up for an appraisal of also whether she is the right person to lead the party,” writes DN.

However, many newspapers agreed that Sahlin made a good decision.

The social democratic-leaning newspaper Folket writes, “It feels quite positive that Mona Sahlin yesterday removed the tape from her mouth and challenged all the members of the Social Democrats’ party board and executive committee to resign their seats.”

The liberal Göteborgs-Posten (GP) writes that “Sahlin has taken the initiative” and that “yesterday Mona Sahlin took the bull by the horns”.

The social democratic Dala-Demokraten is more doubtful, arguing that the Social Democrats’ poor electoral results ought to result in consequences but that the party’s culture is different than that of the other parties and that party leaders usually hang around until they die or retire.

Lena Mellin, a columnist for the independently social democratic tabloid Aftonbladet warns that anything can happen.

“Now it’s total chaos,” she writes, adding that party members may now engage in mean-spirited games to reposition themselves ahead of the Social Democrats’ upcoming extra party congress.

“Social Democrats are good at stabbing one another in the back. This isn’t going to be a pretty spectacle,” writes the independently moderate Svenska Dagbladet (SvD) newspaper.

The paper adds that “Now the pressure in the power struggle is ratcheted up” and “the renewal of policy has been placed on the back burner”.

Meanwhile the results of a survey conducted by the Sifo polling firm, and published in Aftonbladet on Thursday, reveal that former justice minister Thomas Bodström, who recently abandoned his Riksdag seat to live with his family in the United States, is the Social Democratic politician in whom voters have the most confidence.

However, the poll also revealed that more than one in five voters, 21 percent, had no confidence in any Social Democratic politician.

And among respondents who indicated they were Social Democratic sympathisers, Sahlin faired slightly better than Bodström, garnering support of 34 percent of respondents compared with 30 percent for Bodström.

The results are based on responses from 1,000 people.