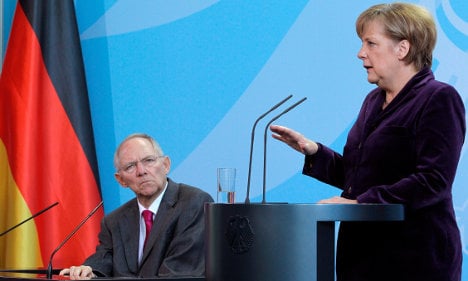 Before heading to meet fellow world leaders in Seoul, South Korea, Merkel warned that the recent decision by the US Federal Reserve to pump $600 billion to prop up America’s fragile economy could have unintended consequences.

“Nobody has an interest in creating new bubbles. Instead, we must see to it that growth in the global economy this year is more sustainable and enduring that we had a few years ago,” Merkel told reporters.

Critics argue that the Fed’s “quantitative easing” stimulus amounts to an effective dollar devaluation, and has the potential to trigger a 1930s-style trade war if other countries respond in kind.

With this in mind, Merkel also pressed her fellow leaders to avoid any form of protectionism, amid criticism that certain countries, notably China and Japan, are keeping their currencies artificially low.

“The biggest danger for sustainable growth is currently coming from protectionism in its different forms,” she said, admitting discussions could be “tricky” at the G20 summit. “We are going to discuss this issue with the Americans in a spirit of partnership.”

Merkel’s critique of US policy joins a broader German assault led by Finance Minister Wolfgang Schäuble and Economy Minister Rainer Brüderle. Both have recently disparaged Washington’s handling of its finances while rejecting US criticism of Germany’s exceptionally high trade surplus.

“We don’t have the slightest interest in conflict,” said Schäuble, who will accompany Merkel to Seoul. “We will do everything we can to help the United States of America in its difficult situation. But it’s not a one-way street.”

Brüderle was even less diplomatic. Speaking to weekly newspaper Die Zeit, he accused the United States of “an unacceptable return to planned economic thinking” once favoured by communist nations.

“It would be absurd to punish those countries that are internationally competitive and are contributing to the global economy’s recovery from the crisis,” he said, adding he was “confident” Germany could fend off unreasonable US demands at the G20.

Brüderle also slammed the growing tendency for nations to keep their currencies artificially low to boost their exports. He accused China, Japan, Brazil and the United States of “indirectly manipulating” foreign exchange markets to their economic advantage.