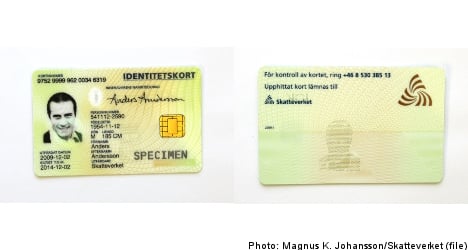 “It is pleasing that more can now get an ID card as it is often a prerequisite to be able to get into and establish oneself in the Swedish society. The large number of ID card applications in October shows clearly how great the need was for a change in the regulations,” said Thomas Norgren at the Tax Agency.

However, the sharp increase in demand led to delays after a new IT system could only be put into place a month after the rule change on November 1st.

“During the first month before the new IT system was ready, details have been checked manually, which has meant considerably lengthened processing times,” the agency confirmed in a statement on Wednesday.

The new IT system allows the agency to use the new regulations to cross-check information automatically with the Migration Board, meaning that more applications can be approved directly without any further checks on identity.

The tax agency has issued a total of 102,000 identification cards to people resident in Sweden since it assumed responsibility on June 1st 2009.

Of these, around 21 percent are Nordic citizens, 31 percent come from other EU countries and the remained come from a country outside of the EU and Scandinavia.

Prior to the change in regulations on October 1st, applicants were obliged to prove their identity with the help of a third-party certifier.

According to Skånska Dagbladet, the name was rejected because of its association with Germany's National Socialist Party. Photo: Bengt Olof Åradsson/Wikimedia Commons
The woman, from the village of Tyringe, which is known more for its medieval church than far-right activity, made the application earlier this year.
Ingegerd Widell, the development officer at the Swedish Tax Agency in charge of registering new names, said she could not confirm the story without knowing the name of the woman.
“I would be extremely surprised if anyone would get that name,” she said.
The Swedish Tax Agency, which handles Swedes' applications to change their name, only accepts new names if they do not cause problems for the holder or cause discomfort to others.
According to the agency, before approving a name, its officials check if it could “cause offence, be presumed to cause discomfort for the individual or for some other reason are unsuitable”.
According to the Skånska Dagbladet newspaper, which first reported on the case, the application was rejected because “the word Nazi is a short form of National Socialism and is associated with supporters of Nazism”.
READ ALSO: Sweden's tax agency rejects 'Prince' name change
Last year, the agency turned down a 26-year-old man who wanted to change his first name to 'Prince', on the grounds that it was “not a word associated with a name”, and in 2011 a man's bid to have 'His Majesty' added to his name was turned down because it could lead to “misunderstandings”.
Another man did get to add 'King' to his name – an idea he came up with after a long night out – six years ago. But the Stockholmer, King Oliver, told The Local in 2016 that his family “still calls (him) Oliver”.
SHOW COMMENTS
Url copied to clipboard!