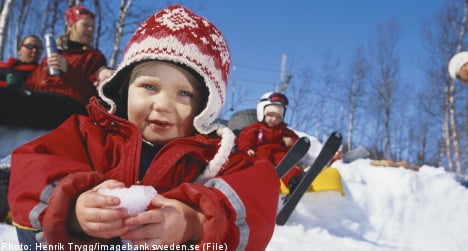 I had a rude shock the other day. It got cold in Stockholm. I felt it creeping in through the windows the night before. At that point I was still in a state of denial.

By 8am the next morning, reality bit, in the form of two children under age four who needed to be dressed for the outdoors. I come from New Jersey, where, by now, kids have mostly been taught to escape to the indoors when it’s raining or cold.

With only anecdotal evidence to back me up, I would say Swedish kids spend at least fifteen hours more per week outside than American kids – and probably more.

It starts from birth. Swedish babies practically live in their carriages, which have rain protection and lambskin padding for when it gets cold. Then there’s the little sleep sack that wraps around the baby who is by now dressed in layers, the last one being thick winter overalls. (Think Ralphie from “A Christmas Story”.) Many Swedes even put their babies outside in their carriages to take naps. They say the fresh air is good for them.

Later on in their lives, at daycare, kids are put through the rigors of all the seasons.

Raining? “Doesn’t matter, throw them outside with their rain suits and gloves. Don’t forget the rubber hats and rain boots.”

And through whatever mother nature brings, the kids are happy.

At this time every year in Sweden, with winter’s biting chill just around the corner, parents begin to assess the clothing situation at home. They need to ensure that they have the clothing it takes to get their kids through the cold and rainy autumn and freezing, snowy winter.

There are so many different items of clothing to choose from and they are each so very specific. For example, there are special rain gloves for two months – November and April – when it rains a lot but isn’t below freezing. These gloves are waterproof but they breathe. Talk about a niche market.

I’ve never even heard of half of the items these kids wear, and, after five years in Sweden, I still don’t know their proper Swedish names.

I do know, however, how to dress my kids. But knowing is easy; doing is hard.

I was home the other day with my 9-month-old son and had to drop-off my 3-year-old daughter at daycare by 9am (I’m on paid paternity leave for six months with my son. My daughter goes to daycare four days a week.)

While my son was finally fully dressed and ready to go, my daughter started to show signs of rebellion. Except for the tests that she puts me through in public, her dressing-time challenge is my worst nightmare.

This is what will happen.

I have probably already worked ten minutes getting her brother dressed, so by the time it’s her turn, I am already sweating. (A while back I realized that I needed to get dressed last, otherwise I would lose my temper at the first hint of a defiant gaze.) First, she’ll run away, forcing me to either scream no from on the floor in the hallway or chase after her and carry her back. If I’m carrying her back, she’ll most likely be screaming no and speed kicking her legs into the air.

At this point, I’m still trying to use words to convince her that it’s good for “all of us” if she gets dressed.

“We don’t want to be late for daycare,” I say. Or, I threaten her: “Otherwise you’re going to be cold and then you won’t be able to play outside with all the other kids.” (I haven’t checked with any child rearing or psychology books about the “threat-fear-guilt” method, but I’m sure it makes me a bad father.)

Here’s where it can go two ways. She can either listen. If this happens, I know I’m going to have a good day. Or, she can fight, and then I know I’ll be pinning her down on the floor, wrapping one arm into a sleeve, then the other, while she screams, cries, and kicks.

Now, that she’s all fired up – and everything has taken so long – her little brother is getting angry. So, as little siblings tend to do, he does as she, and starts wailing.

By this time, I’m ready to start wailing myself. Generally, I just get angry, frustrated, and start yelling some sort of nonsense. At that point, I know, it will get worse before it gets better.

Skip ahead five or ten minutes. My daughter will have already forgotten the stressful getting dressed experience. I, however, will still be feeling guilty that I showed my precious, innocent kids my darkest side.

As we walk to daycare in the crisp Scandinavian air, I relax and remember that I’m lucky to have this time with my kids. If I don’t appreciate the small moments, I think, one day, I’ll be sitting at the dinner table with my wife when we’re 60-years-old, and I’ll be looking back with regret.

By the time we reach the main road, I’ve already promised to appreciate each and every moment with my kids – the warm, sunny days and the dark and frigid, the happy hugs and the angry kicks.

Naturally, like the Swedish seasons, these moments of euphoria come and go. I’m just happy to catch them once in a while. And I know that the days of shorts and tee-shirts are just six months away.

Now that I’ve pulled myself back into the moment, I see daycare around the corner. I ask my daughter if she wants to sing “Ain’t No Sunshine When’s She’s Gone”.

Now we all feel better, and properly dressed for the Swedish weather.