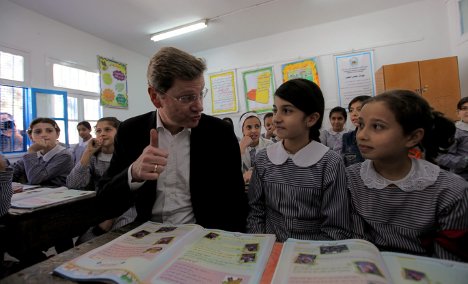 “It is not acceptable to blockade 1.5 million people in Gaza,” Westerwelle told reporters on a brief visit to the Palestinian exclave controlled by the militant group Hamas.

The blockade “strengthens the radicals and weakens the moderates and the opposite is what we should be doing,” he said of the measure, which has been eased by Israel in recent months but still remains in place.

“It is important that imports and exports are allowed through again,” he said, stressing that this was also the position of the European Union.

treatment plant, just south of Gaza City, which is being redeveloped with a €20-million ($28-million) grant from German development bank KfW.

“Gaza must not and will not be forgotten by us,” he said, pledging that Berlin would continue to help the territory, which suffered huge damage to its core infrastructure during a bloody 22-day Israeli offensive two years ago.

“Infrastructure is crucial for development. Water, sewage treatment, education and training are the key components of our aid,” Westerwelle said.

Israel first imposed a blockade on the Gaza Strip in June 2006 after militants there kidnapped Israeli soldier Gilad Shalit, and tightened it a year later when Hamas seized power in the coastal territory.

Shalit is still being held by militants in Gaza, and Germany is believed to have a key role in brokering the negotiations between Israel and Hamas to secure the 24-year-old’s release in exchange for hundreds of Palestinian prisoners.

“We are doing what we can to help on this issue,” Westerwelle said, without giving further details, and reiterating calls for his release.

The strict blockade was imposed on Gaza in a bid to force Hamas into freeing Shalit, but the policy was dramatically eased in July after Israel bowed to a wave of global pressure following a botched raid on a fleet of aid ships which left nine foreign activists dead.

Although Israel now allows in everything except arms or goods which could be used to create weapons or build fortifications, it still maintains a tight naval blockade on the beleaguered strip and does not allow it to export anything.