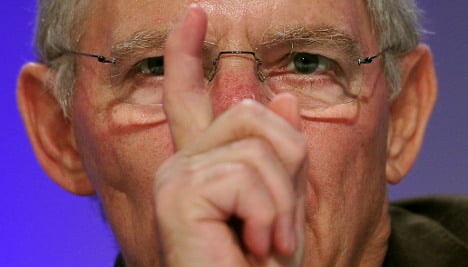 Using unusually strong language, Schäuble said that the Federal Reserve Bank’s attempt to stimulate the US economy with a €600 billion cash injection did not make sense.

“With all due respect, my impression is that the United States are at a loss,” he said at a BMW foundation event in Berlin. “To now say, ‘we’re now going to have another $600 billion,’ will not solve the problem.”

The move is expected to push down the value of the already weak dollar, which will make German goods more expensive in the US – one of the key markets for Germany’s export-driven economy. While the Fed hopes it will spur demand and keep interest rates low in the US, it is also likely to hit countries that sell to the US, including Germany and China – which has also expressed anger over the move.

The Fed is using what economists call “quantitative easing” – buying up US government bonds to inject cash, or “liquidity,” into the markets – in an effort to give its spluttering economy a kick start.

But Schäuble said the move did not make sense because the country’s problems did not stem from a lack of liquidity. Europe had good reason to worry about the Fed’s intervention into the US economy, he added.

No other European country has criticised the action in such strong terms. Schäuble began his assault on Thursday night, when he told broadcaster ZDF that the Fed had already pumped “an endless amount of money” into the US economy with “horrendous” results.

In a separate interview with broadcaster ARD, he said the Fed’s move could “create additional problems for the world” and vowed to take the issue up with the US at a G20 meeting in South Korea next week.

His remarks also follow repeated criticism from Economy Minister Rainer Brüderle in recent days of the US policy.