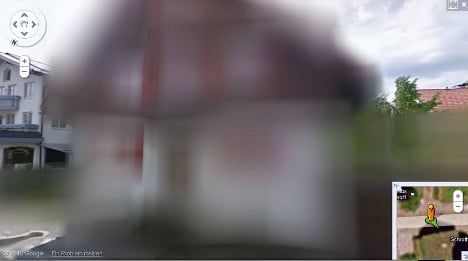 Photo: A screenshot by Jeff Jarvis

Street View is online in Germany and it includes – or rather, excludes – 244,000 addresses that Germans have demanded be pixelated. They have, in their word, demanded their Verpixelungsrecht.

It is more offensive than I had imagined, a desecration of the public demanded and abetted by German politicians and media on a supposed privacy frenzy.

Ugly, isn’t it? As someone in the audience said when I spoke on the topic at a meeting of the Green party in Berlin a few weeks ago, it is as if they are digitally bombing the German landscape.

Now you can drive to Oberstaufen and stand across the street – between the Edele bookstore and Dr. Fassnacht’s building – and look at the building all you want because you would be exercising your right to be in public. But not online, not in the land of Deutschnet, you can’t. Germany has now diminished the public. It has stolen from the public.

This is not a matter of privacy. And don’t tell me it has a damned thing to do with the Nazis and Stasi; that’s patently absurd. If anything, the Stasi would have exercised their Verpixelungsrecht to obscure their buildings from public view, taking advantage of the cloak of secrecy the idea provides. That’s the danger of this.

This is an issue of publicness. These are public visions now obscured. This is why I am writing a book about protecting the public from assaults such as this. I can’t write it fast enough.

What have you done, Germany?

You have digitally desecrated your cities. You have diminished and devalued your public space. You have thus robbed your own public. And you have set dangerous precedents for your future.

All that with a few pixels obscuring buildings on Google Street View.

In the mania over privacy among government and media in Germany, Google was pressured to pixelate not just people’s faces and cars’ license plates but also buildings. Suddenly buildings themselves gained a new Verpixelungsrecht.

Those buildings are fully visible and photographed from public streets. Anyone exercising Germany’s so-called Panoramafreiheit may photograph them. But not Google, not if the owner requests pixelization, and 244,000 German buildings have.

I thought pixelating buildings was mostly just silly until I saw it. Now I am saddened and angered. Look at Hugo-von-Königsegg-Straße in Oberstaufen. You may drive there and stand across the street and take your own picture of the building – but not on Google Street View.

This is embarrassing. When I spoke recently about privacy and publicness (Datenschutz and Öffentlichkeit) at an event organized by die Greens in Berlin, someone from the audience asked whether with all this pixelization, Germany is digitally bombing its own buildings and visual history. At the time, I thought that was a bit strong. Not so much now.

I do not believe this is a matter of privacy. How is one’s privacy violated by taking a photo of a public view from a public street?

Neither do I believe this is a matter of Germany’s unique history. At the Greens event and elsewhere when I’ve spoken about this topic in Germany, Germans have raised the Stasis and Nazis (I didn’t). Now that they’ve mentioned it, I find the argument illogical, even dangerous. If anything, the Stasi would have been the most eager to exercise their Verpixelungsrecht to obscure their buildings and actions from public view, taking advantage of the cloak of secrecy this idea provides. That is the dangerous precedent that is set here. If Google can be told that the public is not public, who else can be told this: Journalists? You?

So why the German mania? I hear some complain that Google is daring to make money for its effort mapping and photographing the streetscape. Well, German governments photograph the land and sell the data. T-Mobile’s Telefonbuch.de not only lists names and phone numbers of citizens but shows images from above of their homes and backyards – from four angles. Sightwalk.de does what Google Street View does. Where is the protest against them? Is that Google is an American company? I hope not.

Is it that Google is a technology company? There lies another danger. If this is how the nation reacts when new technologies bring change, then the technologists may choose to work elsewhere. Germany’s privacy chief has already decreed, for example, that combining geo technology with facial recognition is taboo – before it is even used. What if such technology could be used to help find people after a disaster such as Katrina or the Haiti earthquake? How can one politician be so quick to decree how everyone should not use new technology?

Is this perhaps a trend without teeth, a fiction created by media who resent Google, and politicians who see an opportunity here to get attention? Considering that Google has a higher marketshare in Germany than in most any other country on earth, I think that’s possible. I’m not the only one who has been ridiculing the pixel bombs. Jens Best has promised to take pictures of the pixilated building and link to them from Street View. On Twitter, there’s a conversation underway under the hashtag, the label, #blurmany. But even if the Verpixelungsrecht is merely politicians’ and media’s folly, the danger and damage are the same.

I say this is an issue of publicness, of the value of the public and the public’s ownership of it. This is why I am writing a book to be called “Public Parts” in the US – and “The German Paradox” in Germany – about protecting the public from assaults such as this. For publicness is our precious tool of democracy.

I write this as a friend of Germany. I urge you to consider the consequence, the precedent, the meaning of what you have done to your own digital world and the society we are building there, to your own Deutschnet.

Jeff Jarvis, author of “What Would Google Do?”, writes extensively about media and internet issues. This commentary appeared as a post on his blog BuzzMachine and in German at Zeit Online.