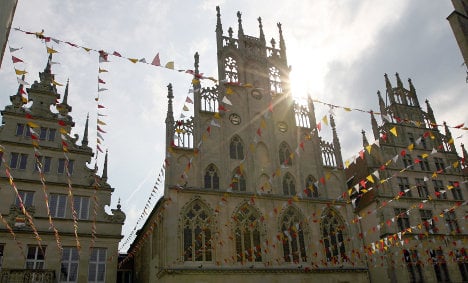 If you’ve wondered lately just how the Thirty Years’ War came to end, it might be time for a trip to Münster, the picturesque place that put Westphalia on the map in 1648.

Oddly, the peace treaty that helped stop three decades of internecine Christian warfare was sealed in a city taking its name from a monastery founded back in year 805 by a Frisian missionary.

Münster undoubtedly revels in its religious and cultural history, but fortunately the city’s 50,000-strong student population keeps the place from becoming too fusty.

The city is centred around St. Paul’s Cathedral, which was completed in the early 13th century. It has since been destroyed and rebuilt, renovated or extended more than five times. It now stands as one of the city’s most impressive and beloved buildings and bears witness to the open air markets on Domplatz every Wednesday and Saturday afternoon.

Most residents have made them part of their weekly regimen. University student Christian Cloppenburg, born and raised in the city, recommends a cheese stall with an orange roof which is famous for handing out little sampler bags for a mere €3.

Close by, Münster’s historic Town Hall is where the Thirty Years’ War officially ended with the Peace of Westphalia. The grand Gothic building was, like so many of Münster’s architectural wonders, completely destroyed during World War II and rebuilt in the 1950s.

A hop and a skip away is St. Lambert’s Church, where Cardinal Clemens von Galen delivered his sermons against the Nazis with such vehemence that he earned the nickname “The Lion of Münster.” But the church also has a macabre side to its long history – in the mid-16th century the bodies of three Anabaptist leaders were suspended in cages in the tower as a warning. The cages are still there today, rattling above the clock and providing a ghoulish visual from wherever you happen to be standing in the city.

Outside the church is the beginning of Prinzipalmarkt, the most famous street in Münster. The forty-eight arched houses that line the cobblestoned street hark back to the 13th century, when they were built for merchant traders. Nowadays, fully restored, they are home to fashion labels, boutiques and up-market cafes and restaurants.

Away from the two imposing shadows of the cathedral and St. Lambert’s (although one never completely escapes the latter’s spooky, blackened spire) the shopping and coffee-drinking continues, but with a markedly different feel. Starting on Salzstrasse, Baroque lovers can get their fix by gazing at three of Münster’s finest antique-bling buildings: the Dominican Church, designed by Lambert Friedrich von Corfey, and the Erbdrostenhof and St. Clement’s Church, designed by his most famous student, Johann Conrad Schlaun.

Just behind the Erbdrostenhof, a former aristocratic residence that now acts as the seat of the State Curator of Westphalia, stands the sweet and simple St. Servatius’ Church which has been standing since 1230. Once you’ve finished ogling, head back towards St. Clement’s and take a coffee into its garden. Beautifully kept, there is a welcome peace and quiet found within its walls.

But Münster offers material as well as spiritual nourishment.

The area surrounding St. Ludger’s Church is buzzing shopping zone. Founded in 1173, the house of worship is sandwiched between temples of contemporary consumerism.

After giving your credit cards some exercise, head to the Kuhviertel (via St. Peter’s Church which stands on the River Aa). The district is full of steepled roofs, flower boxes and cobblestone streets. Beer aficionados should head to the famous Pinkus-Müller Brewery – Germany’s oldest organic brewer. On your way out take a gander at the Church of Our Lady with the biggest Gothic steeple in Westphalia.

Of course, a trip to Münster wouldn’t be complete without visiting the palace that now houses the university’s administration. Designed by Johann Conrad Schlaun for the local prince-bishop to call home, construction began in 1767.

Münster has direct rail links from the Ruhr Valley, the Rhineland, Bremen and Hamburg.