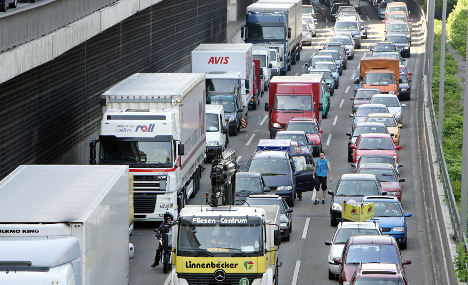 “We’re at a bit of a loss here,” a representative from the NRW state roadworks authority Straßen NRW told news agency DPA.

Sections of the A2, A42 and A57 motorways were jammed for stretches of up to 20 kilometres each, with many local radio stations turning their focus solely on the ensuing chaos in the country’s most populous state.

Another Straßen NRW spokesperson, Bernd Löchter, told local newspaper Rheinische Post that both foggy weather and the rush back to work following a long holiday weekend in the region may have contributed to the problem.

“There are no new construction sites.” he said.

Police told the paper there had also been no large accidents.

State Transportation Minister Harry Voigtsberger told DPA that continuing fallout from a one-day train conductor strike in the region on October 26, as well as a plastics trade fair in Düsseldorf, could have also been factors.

But on the day of the train strike the traffic jams measured only a collective 130 kilometres.

Voigtsberger said his ministry would push for more measures to prevent such traffic problems, including motorway expansions to problem junctions, a traffic study to suggest new solutions, and an improved warning system for drivers.

The state knows far too little about why the deadlocks continue to reoccur, he said.