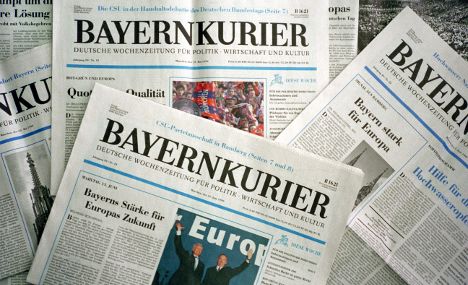 The offending flyers were distributed inside the Bayernkurier over the weekend at the CSU’s party convention, daily Die Welt reported.

“After breakfast go to Russian-occupied East Prussia,” the travel offer read. “Along the Amber Coast to Cranz in Samland and to the capital Königsberg with its 700 years of German history.”

The antiquated references to German lands divided between Russia and Poland after the Second World War would be enough to ignite a diplomatic crisis had they been published in the wrong place, the paper said.

“It’s one of the most annoying things in the world,” chief editor of the Bayernkurier Peter Hausmann told Die Welt, adding that no one at the paper had probably proofread the ad before publication.

“The producer created and printed it, then it was distributed, and that shouldn’t have happened.”

The gaffe is particularly painful because the CSU had debated whether it wanted to continue spending some €1.15 million per year to fund the weekly paper, Hausmann said.

With not a single place name in the ad reflecting its post-1945 status, it is clear that Wembacher Reisen, the Waging am See-based travel company behind the ad, was intentionally calling up WWII-era nationalist sentiments, the paper said.

“When the Bayernkurier offers a trip to ‘Russian-occupied East Prussia,’ one remembers a time well before the peace and reconciliation policies of Willy Brandt,” said centre-left Social Democratic parliamentarian from the travel company’s electoral district, Bärbel Kofler.

“It is conceptually linked to the darkest chapter of German history,” she added.

Meanwhile the family behind the travel company, which has worked with the CSU for 20 years on the party paper, claims it made a mistake with the ad’s wording.

“I simply forgot the word ‘former.’ I was never good in history,” said Lydia Wembacher, who is filling in for her husband while he leads a tour in Rome. “As in – Russian-occupied former East Prussia.”

The family said it was sorry for the mix-up.

“We in no way want to change history,” she said.

Ironically, the blunder occurred the same weekend that CSU leader Horst Seehofer lauded the party’s modern policies following the implementation of a quota for women in the party’s leadership.