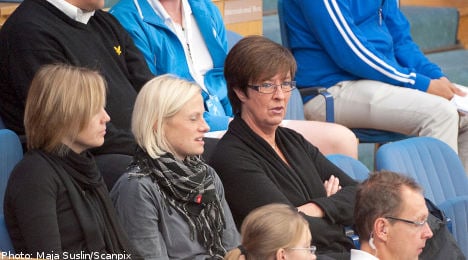 Prosecutor Gunnar Stetler, head of the National Anti-Corruption Unit (Riksenheten mot korruption), has confirmed that there is no suspicion that Sahlin has committed any crime.

What is suitable and unsuitable, defensible or indefensible for a party leader and MP is the not the Prosecution Authority’s task to judge, Stetler said in a written statement.

“What is clear is that there is a certain level of uncertainty within the Riksdag regarding what is permitted for an MP to accept as a gift. Even though it does not remove responsibility this is something that to some extent can count in favour of the individual when making a criminal assessment,” said Stetler.

Generally speaking, the prosecutor wrote in his decision, it is enough that there is a risk that a benefit may be perceived as personal and can create a relationship of dependency, in order to render the gift criminal.

But in this case he considered the possibility to exert illegal influence to be extremely slight, even if the value of the gift was not insignificant.

Mona Sahlin was last week scathing in her criticism of the Moderates’ new party secretary Sofia Arkelsten for allowing herself to be bought overseas trips, including a study trip to the south of France funded by the oil firm Shell.

“I think that she has shown terribly poor judgement. And obviously more than once. It is now up to the Moderates’ leader to show if he thinks it is reasonable to have a party secretary which has done so,” Sahlin said regarding the Arkelsten revelations last week.

Four days after forwarding her opinion on Sofia Arkelsten, Sahlin was in attendance at the Royal Tennis Hall in Stockholm to watch Swiss star Roger Federer win the final, as a non-paying guest.

The final was the fifth consecutive day that the Social Democrat leader and former minister had allowed herself to be treated to complimentary tickets, together with a guest. The total value of her Stockholm Open treat amounted to 7,500 kronor ($1,130).

Mona Sahlin has however defended her decision to accept the complimentary tickets.

“There is a considerable difference between an oil firm paying for a trip and hotel for an politician engaged in environmental issues in order to have an influence in a political issue,” Sahlin said on Tuesday.

“I look forward to the next Stockholm Open and next football international,” she said when asked about the possible corruption investigation.