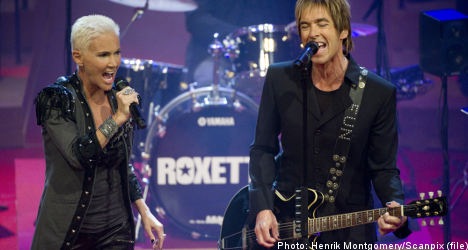 Roxette performs at the Riksdag during Love Stockholm on June 18

The tour kicks off on March 1st in Kazan, Russia and will pass through at least four continents, Live Nation announced on Wednesday.

“This is what I have longed and hoped for the whole time since 2002. I am understandably extremely happy to have the opportunity to greet audiences around the world again,” singer Marie Fredriksson said in a statement.

Fredriksson was diagnosed with a brain tumour in September 2002, which was later successfully removed in surgery. She and musical partner Per Gessle went on hiatus while Fredriksson recovered until reuniting in May last year.

Up until then, both pursued solo and other collaborative efforts, as well as re-releasing old material.

“If you had asked me several years ago if there would ever be a new Roxette tour, I would have immediately answered NO! Given what Marie has gone through, it is not only inconceivable, it is almost magical in my eyes. It will be wonderful to be able to meet all our fans on Planet Earth once more,” added Gessle.

So far, Live Nation has confirmed 33 dates in 22 countries in Europe, North and South America and the Middle East until the end of July, with more to follow.

This past summer’s six sold-out concerts whetted Fredriksson and Gessle’s appetite to hit the road again. Their last tour for the album “Room Service” in 2001 covered Europe, but the duo’s previous world tour was for the album “Crash! Boom! Bang!” in 1994 and 1995.

Tickets for the confirmed dates go on sale on Monday.

Roxette was formed in 1986 in western Sweden’s Halmstad and celebrated its 20th anniversary four years ago. Its international breakthrough came in 1989 with the single “The Look” from the album “Look Sharp!”

The band has sold over 75 million albums. In its heyday, the duo stayed on the Billboard charts for four straight years.