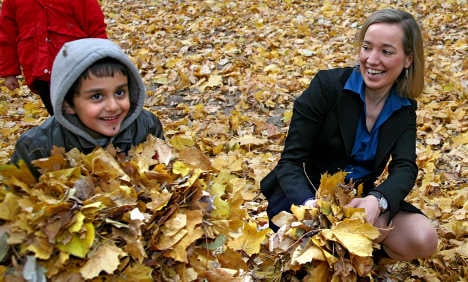 The minister after the announcement at a Berlin Kita. Photo: DPA

For the next four years the ministry will make some €400,000 million available for part-time educators to help the children of immigrants under the age of three learn German.

“Language is one of the most important keys to integration,“ Family Minister Kristina Schröder said of the new programme, called the “Early Opportunities Initiative.”

Day care centres, or Kitas, that have an above average level of non-German speaking children must apply with the ministry by December 15 to receive the aid. Each participating child care centre would receive a budget of €25,000 per year to hire additional staff.

According to the ministry, the number of children who require extra language assistance varied between 13 and 56 percent in 2009, depending on the region.

“Today, language competence determines in large part whether there will be satisfactory participation in social life, school success, career chances and also the development of personality and the integration in the immediate social surroundings,” Schröder said in a statement.