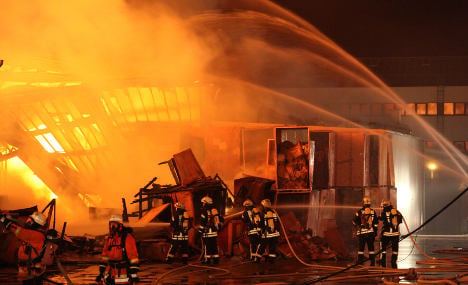 Fire fighters put out the blaze in Schwieberdingen on October 30. Photo: DPA

The warehouse was the main storage facility for personal belongings being shipped to and from the area for Stuttgart-based families by a US-contracted moving company, the US military said.

“We’re going to do everything we can to help the families recuperate what they lost, but we fully understand folks will have lost sentimental and irreplaceable items,” said US Army Garrison Stuttgart commander Col. Carl D. Bird in a statement.

“This is not an easy situation to deal with, however, military families are resilient, and we have a great community to support them.”

The fire began on Saturday evening at the warehouse in Schwieberdingen and lasted almost three days, police spokesman Peter Widenhorn told The Local.

“They finally managed to get the coals put out today. It was huge,” he said, adding that more than 350 fire fighters, 55 rescue workers and 20 police officers were on the scene to get the blaze under control.

The cause of the fire in the Baden-Württemberg community some 10 kilometres from Stuttgart has yet to be determined, he said.

The military notified the affected families on Tuesday.

Lorie Warchol, a Family Readiness Coordinator for the US military, told The Local she was fielding calls from these people about what to do next.

“They are devastated. They’ve lost everything,” she said.

The US military has set up an assistance centre and will hold two meetings in Stuttgart on Wednesday to help the victims file insurance claims and find temporary furnishings for their homes. Counsellors and religious guidance will also be available.