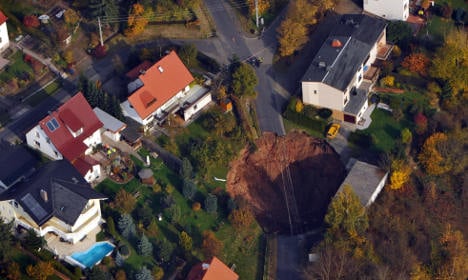 The crater, measuring some 40 by 15 metres, appeared in the town of Schmalkalden around 3 am, a police spokesperson said. A nearby resident heard the noise and called police.

The hole is believed to be some 20 metres deep, she added.

No-one was injured in the incident, but another vehicle near the hole is in danger of falling into the hole.

Nine homes containing some 25 residents were evacuated, and a large contingent of police and fire fighters are still securing the site. During a press conference Monday afternoon, police said they did not know when it would be safe for residents to return.

According to head of the Thuringia mining authority, Hartmut Kießling, the sinkhole happened naturally and authorities are working to find ways to fill it as quickly as possible.

Jan Katzschmann, an official from the state geology service, said that a large underground cavity had likely collapsed, and further slides could be possible in the coming days.

Their main concern is stabilising the area, Thuringia Environment Minister Jürgen Reinholz said, adding that the situation remains delicate because the use of heavy machinery to fill the hole may cause further damage.

Germany is no stranger to dangerous ground shifts resulting from old mines.

A similar event occurred in April 2010 in the neighbouring state of Saxony-Anhalt when a massive section of earth abruptly collapsed outside Bernburg, leaving a 40 metre-deep crater.

In January 2010 two homes in the town of Tiefenort in Thuringia were evacuated after a landslide opened up a two-metre crater nearby. That town is located near the site of a former calcium salt mine, and there was another landslide about eight years ago in the same area that was filled with concrete.

And in July 2009, three people were killed when their house collapsed into a lake in the Saxony–Anhalt town of Nachterstedt. The area near the town was extensively mined for lignite, or brown coal, during the 19th century, meaning the ground was shot through with hundreds of tunnels.