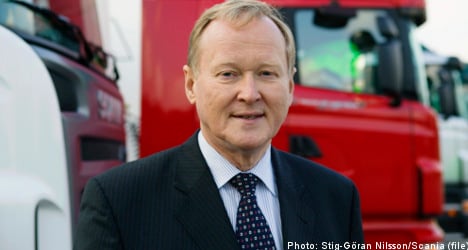 “We’re in a final phase; I can hopefully indict or make a decision about an indictment at the end of the year or in the beginning of next year,” prosecutor Nils-Eric Schultz told Sveriges Television (SVT) on Tuesday.

The violations are said to have occurred in the early 2000s within the framework of the United Nation’s oil-for-food programme.

According to SVT, two high ranking Scania managers are likely to be implicated in the kickback scheme, which involved the payment of bribes to Iraqi officials in order to secure lucrative contacts for the company.

Schultz told SVT that Scania CEO Leif Östling is among the Scania bosses possibly facing indictment as he held “the highest responsibility for these deals.”

Scania refused to comment on news of the impending indictment.

“This preliminary investigation has been going on for years now and we look forward to having the investigation closed,” Scania spokesperson Hans-Åke Danielsson told the TT news agency.

However, Danielsson denied reports that Östling may be charged in connection with the investigation.

“Three, four people within Scania are suspected of committing crimes, but Leif Östling is not among them. He hasn’t yet been interviewed and he hasn’t been informed of any suspicions against him,” said Danielsson.

The UN oil-for-food programme was designed to ease the suffering of the Iraqi people during a UN embargo against trade with Iraq.

Launched in 1995, the programme allowed the limited sale of oil in exchange for food, medicine, and other essential goods.

But shortly after it began, the regime in Iraq began demanding supplemental charges on various contracts.

Around 2,200 companies around the world have been exposed for paying bribes in order to do business in Iraq, including 15 Swedish companies, with Volvo, Scania, and Atlas Copco featuring most prominently.

In March 2008, Volvo Construction Equipment International paid $19.6 million in settlements to US authorities, acknowledging some subsidiaries made illegal kickbacks through the programme. It also had to repay past profits with interest from contracts related to the bribery scandal.

In 2020, the group saw “dramatic fluctuations in demand” due to the Covid-19 pandemic, chief executive Martin Lundstedt said in a statement.

For 2021, Volvo raised its sales forecasts in its trucks division – its core business – in Europe, North America and Brazil.

However, it said it also expected “production disturbances and increased costs” due to a “strained” supply chain, noting a global shortage of semiconductors across industries.

The truck making sector is particularly sensitive to the global economic situation and is usually hard hit during crises.

In March, as the pandemic took hold around the world, Volvo suspended operations at most of its sites in 18 countries and halted production at Renault Trucks, which it owns, in Belgium and France.

Operations gradually resumed mid-year, but not enough to compensate for the drop in earnings.

However, the group did manage to cut costs by 20 percent.

“We have significantly improved our volume and cost flexibility, which were crucial factors behind our earnings resilience in 2020,” the group said.

Volvo's business regained strength in the second half of the year.

“Customer usage of trucks and machines increased when the Covid-19 restrictions were eased during the summer and this development continued during both the third and fourth quarters,” it said.

“Both the transport activity and the construction business are back at levels on par with the prior year in most markets.”

For the fourth quarter alone, the company reported a 38-percent rise in net profit from a year earlier.