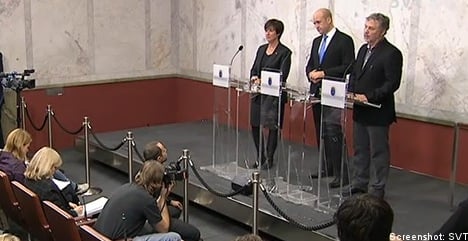 According to Reinfeldt, Sweden aims to pull its combat troops out of Afghanistan between 2012 and 2014 and will maintain a largely civilian support presence after that.

“Our ambition is that Sweden’s presence in Afghanistan should shift from a combative role to a more supportive role,” he told reporters in Stockholm as he presented a nine-point plan for the pull-out.

“This change to a completely supportive role should be in place by 2014 at the latest.

“We have to take developments on the ground in Afghanistan into account but our aim is clear,” he said, adding that the country would need support “far beyond 2014.”

“Our aim is that during 2012 we will see concrete results of the process of transferring responsibility for security (to the Afghans) and that this will make it possible to reduce the number of (Swedish) combat troops,” the proposal read.

Sweden will maintain its current number of some 500 soldiers in Afghanistan through 2011, it said, without specifying troop numbers after that.

Even after 2014, some military personnel will likely remain to, among other things, help train Afghan troops, the Green Party’s Eriksson said.

“Swedish engagement in Afghanistan should be long-term,” he said

“The agreement is very much in line with what the Green Party has wanted.”

Reinfeldt’s centre-right government, which has ruled as a minority since September 19 elections, needs opposition support for the bill as the far-right Sweden Democrats have said they oppose continued a Swedish troop presence in Afghanistan.

The Social Democrats and Greens, in a since dissolved Red-Green coalition with the formerly communist Left Party, also campaigned ahead of the elections on demanding a withdrawal of the Swedish troops in Afghanistan.

However, the Sweden Democrats’ emergence as kingmaker in a hung parliament prompted the two centre-left parties to shift their position.

On Monday, Social Democrat leader Mona Sahlin insisted the question of when to withdraw Swedish troops was “too important to leave up to an uncertain situation in parliament … that would not be worthy of the issue.”

Sahlin added that when Swedes are sent out in the field and risk their lives, there has to be a broad political unity behind the decision.

“This is a common commitment we are now making,” she said adding, “this is not so much a compromise as a new strategy.”

The government spent the weekend negotiating with the Red-Green opposition parties about Sweden’s Afghanistan policy.

On Sunday, Reinfeldt, along with foreign minister Carl Bildt, delivered the government’s third and final offer to the leaders of the three Red-Green parties, which resulted in the Left Party breaking off further negotiations.

The talks covered a number of points about the future of Sweden’s strategy for Afghanistan, including how to transition from a combat mission to a support mission. The Left Party, however, believed the move was simply replacing one military strategy with another.

The talks have been based on the goal of handing over responsibility for security to Afghan forces by 2014.

According to Ohly, the government has remained too vague about committing to a specific timetable for withdrawing Swedish troops from Afghanistan.

News of the Afghanistan agreement came shortly after Ohly’s Monday morning announcement that the Left Party was abandoning talks aiming at a broad agreement about the future presence of Swedish troops in Afghanistan.

In announcing his decision, Ohly criticised the Social Democrats and the Greens for not standing by an Afghanistan agreement forged between the three centre-left Red-Green in the run up to the September parliamentary elections.

“It means that we in the Left Party must work even harder as the opposition on this issue,” said Ohly.

The government currently has a parliamentary mandate to keep the troops in Afghanistan until January 1, 2011.

The new strategy will be presented to in the Riksdag on Thursday and a final vote is expected in mid-December.

Sweden is officially neutral and not a member of NATO and the question of how long its troops should take part in the NATO-led International Security Assistance Force (ISAF) in Afghanistan is a sensitive one.

Last month, a Swedish soldier was killed — the fifth since the troops were deployed in Afghanistan in early 2002 — and several were injured.