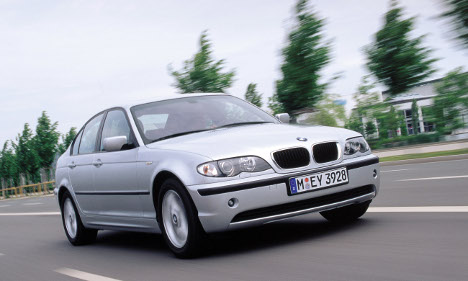 Carmakers have long used the high-speed allure of Germany’s motorways to sell their vehicles abroad – but they also offer the actual driving experience for those willing to make the trip.

With discounts of up to seven percent, North American customers can pocket thousands of dollars by picking up their vehicles at the German factory. The savings are often enough to turn the whole experience into a nice European vacation.

“It’s about the farthest you could get from a negative car-buying experience,” said Los Angeles resident Matthew Wendorf, who came to Germany in 2006 and 2008 to pick up new BMW models.

The 32-year-old said he and his wife saved between $4,000 and $5,000 on their new rides. The couple timed their first trip to Munich’s BMW factory to coincide with the city’s famous Oktoberfest beer festival, then drove their new 330 model on to explore other regions of Germany and Austria. The second time they took their new 135 coupe to Prague and then back to Frankfurt to visit new friends they met in a beer hall on their first tour.

One of the best parts of travelling Europe by car was seeking out back roads that many tourists never see, he said.

Wendorf sounded a bit wistful when describing the pick-up experience at the futuristic BMW World facility on the outskirts of Munich, recalling the company’s extravagant introduction of his new car.

“You meet your car by descending this big staircase to see it spinning on a platform – it’s a bit over the top with the brand indoctrination and all, but it’s also pretty cool. You can’t help but be impressed,” he said.

Mercedes-Benz, Audi and Porsche all stage similarly grand customer introductions to their cars, which often include fancy meals, tours of factories and museums, and luxury hotel rooms.

At Mercedes-Benz, the first German car company to start a European delivery programme in 1965, the experience at the Sindelfingen factory is “magical,” according to their programme administrator of 13 years, Annedoris Korallus.

“Customers are looking for an authentic experience, and they like going back to the source,” she said. “We are the birthplace of the car, so it’s almost like they’ve given birth to it themselves when they pick their car up.”

When the company’s delivery programme started more than four decades ago, North American customers were interested in the prestige of owning European-made cars, which weren’t as easy to come by then. The cars remain coveted status symbols, but the delivery schemes have become a tool for gaining and maintaining customer loyalty in a difficult market, Korallus said.

Though the European delivery programme makes up only one percent of Mercedes-Benz sales in the United States, it remains an important marketing tool, proven by the fact that about 75 percent of the participants are repeat customers, the company said.

“I’d like to do it as much as possible, but they are still expensive cars,” said repeat BMW customer Wendorf, adding that potential European delivery customers should be aware of a few drawbacks.

While the savings can be pretty convincing, there will be more paperwork to fill out at the local dealership, and the number of models included in the programme are limited.

The biggest drawback is that after customers take their new vehicles for a spin around Europe, they have to drop them off again to be shipped back to the US, which takes several weeks.

“It’s pretty agonising after a while,” Wendorf said. “You’ve already driven it and you’re making payments, which can also make trade-ins a bit complicated.”

Another caveat can be particularly disappointing for speed demons, who the car companies warn should wait to hit high speeds in their new vehicles until they pass an initial engine ‘break-in’ distance of about 1,000 kilometres.

“It’s a bit anti-climactic at first because you have to take it easy, even though you have the feeling, ‘I’m on the autobahn, I can do whatever I want’,” Wendorf said.

“But eventually I was able to open it up and really enjoy driving in Germany.”

Customers will need to find a local dealership that offers European delivery and see if the programme offers the model they want. According to Wendorf, because the cars aren’t coming from dealers’ allotments, they might be more willing to “wheel and deal” on the price. Note: There are no discounts on Porsche models, but the company does include insurance and a few travel perks on their programme.

After payment, customers will then need to decide on which travel options they want to take. Most of the companies periodically refresh their package deals.

Then customers travel to their chosen factory in Germany, pick up their car, and enjoy the open road until it’s time to drop it off back at the factory or another location on the Continent (extra fees may apply to non-German drop-off locations).

Each company offers different insurance options for their customer’s short-term stay in Europe as well, which means a few additional choices.

After arriving back home, customers will then have to wait several weeks for their new car.

PARTNER CONTENT
Making Waves: Female entrepreneurs having an impact in 2022

Tesla's gigafactory outside the doors of Berlin. dpa-Zentralbild | Patrick Pleul

“When I saw on TV that the Tesla factory was going to be built here, I couldn’t believe it,” said Steffen Schorch, driving his trusty German-made car.

The 60-year-old from Erkner village in the Berlin commuter belt has become one of the faces of the fight against the US auto giant’s first European factory, due to open in the Brandenburg region near Berlin in July.

“Tesla needs far too much water, and the region does not have this water,” said the environmental activist, a local representative of the Nabu ecologist campaign group.

Announced in November 2019, Tesla’s gigafactory project was warmly welcomed as an endorsement of the “Made in Germany” quality mark – but was immediately met with opposition from local residents.

Demonstrations, legal action, open letters – residents have done everything in their power to delay the project, supported by powerful
environmental campaign groups Nabu and Gruene Liga.

Tesla was forced to temporarily suspend forest clearing last year after campaigners won an injunction over threats to the habitats of resident lizards and snakes during their winter slumber.

READ MORE: Is Germany’s Volkswagen becoming ‘the new Tesla’ as it ramps up e-vehicle production?

And now they have focused their attention on water consumption – which could reach up to 3.6 million cubic metres a year, or around 30 percent of the region’s available supply, according to the ZDF public broadcaster.

The extra demand could place a huge burden on a region already affected by water shortages and hit by summer droughts for the past three years.

Local residents and environmentalists are also concerned about the impact on the wetlands, an important source of biodiversity in the region.

“The water situation is bad, and will get worse,” Heiko Baschin, a spokesman for the neighbourhood association IG Freienbrink, told AFP.

Brandenburg’s environment minister Axel Vogel sought to play down the issue, saying in March that “capacity has not been exceeded for now”.

But the authorities admit that “the impact of droughts is significant” and have set up a working group to examine the issue in the long term.

The gigafactory is set to sprawl over 300 hectares – equivalent to approximately 560 football fields – southwest of the German capital.

Tesla is aiming to produce 500,000 electric vehicles a year at the plant, which will also be home to “the largest battery factory in the world”,
according to group boss Elon Musk.

In a little over a year and a half, swathes of coniferous forest have already been cleared to make way for vast concrete rectangles on a red earth base, accessed via the already iconic Tesla Strasse (Tesla Street).

The new site still has only provisional construction permits, but Tesla has been authorised by local officials to begin work at its own risk.

Final approval depends on an assessment of the project’s environmental impact – including the issue of water.

In theory, if approval is not granted, Tesla will have to dismantle the entire complex at its own expense.

But “pressure is being exerted (on the regulatory authorities), linked to Tesla’s significant investment”, Gruene Liga’s Michael Greschow told AFP.

In early April, Tesla said it was “irritated” by the slow pace of German bureaucracy, calling for exceptions to the rules for projects that help the environment.

Economy Minister Peter Altmaier agreed in April that his government “had not done enough” to reduce bureaucracy, lauding the gigafactory as a “very important project”.

Despite Germany’s reputation for efficiency, major infrastructure projects are often held up by bureaucracy criticised as excessive by the business community.

Among the most embarrassing examples are Berlin’s new airport which opened last October after an eight-year delay and Stuttgart’s new train station, which has been under construction since 2010.

Brandenburg’s economy minister, Joerg Steinbach, raised the possibility in February that the Tesla factory could be delayed beyond its July planned opening for the same reason.