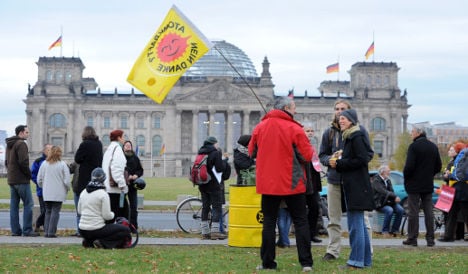 Greenpeace demonstrators mounted a giant anti-nuclear poster on the glass facade of the Berlin offices of Merkel’s Christian Democrats (CDU) while some 2,000 activists formed a human chain around the Bundestag lower house.

Inside, opposition Greens deputies wore black clothing and yellow “X” pins to underline their rejection of nuclear power, as Merkel’s centre-right coalition passed a bill extending the lifetime of the 17 German reactors by up to 14 years.

“The government promised an energy revolution but this is a putsch here,” said the head of the Greens’ parliamentary group, Jürgen Trittin, during a fractious debate before the legislation passed 308 votes to 289.

“Voters want future-oriented policies and not your partisan bickering,” he shouted to the opposition, adding that they had proposed no viable alternative to the government’s plans.

Merkel intends to channel some of the billions of euros that utility firms will earn from the extension into solar and wind power.

The legislation would mean that Germany will still have nuclear power as part of its energy mix until around 2035. But it could still face a tough fight in the upper house, where Merkel’s alliance lost its majority in May, as well as court challenges.

Due to strong public misgivings about the safety of nuclear power, the government in 2000 under then Chancellor Gerhard Schröder agreed to mothball the last power plant within the following two decades.

Merkel’s plans, which she hopes to pass into law by the end of the year, have revitalised the German anti-nuclear movement, which gained momentum in the aftermath of the Chernobyl disaster in Ukraine in 1986.

Tens of thousands of people demonstrated in Berlin against the extension in September, and protesters have warned of more to come, including next month against a shipment of highly radioactive nuclear waste from France.

They argue that it is irresponsible to promote nuclear power while there is no permanent storage site for the waste produced, either in Germany or anywhere in the world.

There are also concerns that nuclear power stations are sitting-duck targets for terrorists, as well as worries about the safety of some of the country’s ageing plants.