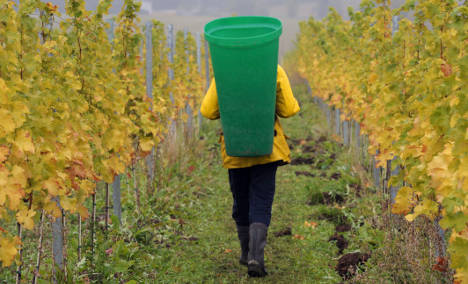 This autumn German vintners will likely have their smallest harvest in 25 years, enough to produce some seven million hectolitres of wine, or 25 percent less than average, the organisation predicted.

“The reason for the unusually small harvest lies mainly in the small grapes caused by the very cool temperatures when the vines bloomed,” president of the German winegrowing association Norbert Weber said.

Cool and wet weather in August delayed ripening and created prime conditions for rotting, he added.

In order to protect the harvest, the rotted vines had to be trimmed out ahead of time, he said.

“This was not an easy year for our winegrowers,” Weber said. “It demanded strong nerves and much patience.”

Meanwhile other European wine-growing regions in France and Spain have had an excellent year, which means German vintners will struggle to maintain their position in the world market, DWI leader Monika Reule said.

While 2010’s harvest may be small, it will still be valued for its quality, Reule said.

Overall the wines will have a lighter flavour than last year’s, she said.