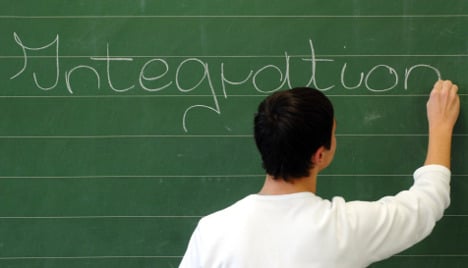 Even before he was 10 years old, Joshua Lupemba’s German teachers had written him off. They told him he was good at sport but no good at maths.

“So I accepted that … and I became really rebellious,” Lupemba, now 23, said. “I declared war on my teachers.”

His father, from the Democratic Republic of Congo, left the family when Lupemba was four months old. His mother, who came to Berlin from Ghana in her late teens, was left to raise Lupemba and his older sister on her own.

“She did the best she could and she did it well,” Lupemba said. “She worked as a cleaner and she’d take us with her so we could learn the value of work. But my schooling was a different issue because my mum was not very well-educated.

“I understood education was something you had to do but I never saw the purpose of it. I didn’t have a role model.”

Lupemba’s story is common in Germany’s immigrant communities. Language difficulties, social and cultural upheaval, or as in Lupemba’s case, low expectations and a lack of role models, are holding many children back.

In 2008, according to the federal government’s latest integration report, 13.3 percent of immigrant children aged 15 to 19 left school without any kind of qualification – twice the rate of youngsters from ethnic German families. Worryingly, the immigrant drop-out rate actually rose compared with 2007, when it was 10 percent.

Some 43 percent of immigrant children graduate with only a Hauptschule certificate – the lowest type in Germany’s multi-tiered secondary school system – compared with 31 percent of German children.

At the other end of the scale, just one in 10 immigrant children graduate from an elite, university-track secondary school, or Gymnasium, compared with one third of German children, according to a July report from social research group the Paritätische Wohlfahrtsverband.

The education failures cause problems in adulthood, particularly in Germany’s large Turkish population, which has higher unemployment and crime rates than the rest of the country. All of this has been fodder for anti-immigration advocates like Thilo Sarrazin, the statistics-loving former central banker who sparked a sometimes constructive, sometimes poisonous debate about integration this summer.

Yet it also represents a massive missed opportunity, as The Economist magazine wrote earlier this year, pointing out that a country in demographic decline like Germany “cannot afford such waste” of its human capital.

Living down to low expectations

So how has it come to this? In a sense it’s not surprising: the immigrant groups that do conspicuously badly in school, such as Turks, largely came to Germany as low-skilled “guest workers” decades ago. Their parents are poorer, often don’t speak German well, and have lower expectations of their children’s education.

Most experts agree bad German is the biggest hindrance to getting ahead in life.

“It’s obvious that language is the main problem,” said Stefan Fuchs, a researcher at the Institute for Demography, General Welfare and Family in Sankt Augustin near Bonn. “Other countries have colonial histories but for Germany, which doesn’t have this, people don’t have that language background. If one searched for a single solution, that would be it. You can’t teach boys who don’t have enough language skills.”

Without strict discipline from parents regarding their education, children can often get on a downward spiral once they start to struggle at school, he added.

“In school, they have too little experience of success and so they search for success in other ways – they go online, they watch television, play computer games. It’s a spiral downwards.”

Mona Kheir El Din, a Berlin-based education consultant who was born in Egypt but whose mother is German, said many parents from Turkish and Arab backgrounds would let their children idly spend their time watching television unsupervised, thinking it would help with their German language.

“I have worked with children aged 12 to 14 and they told me they were watching films that were not okay,” she said. “I wouldn’t let my children watch them.”

Indeed, parental expectations are a big issue, said Daniel Faas a German sociology lecturer currently based at Trinity College, Dublin. Parents who came to Germany as unskilled workers from poor areas of Anatolya in Turkey may have low education expectations of their children. By contrast, Chinese, Vietnamese and Indian parents put very high demands on their children, who accordingly do very well.

Equally worrying is that fact that these differences are in danger of becoming ingrained in communities, he said.

“I’m not such a fan of those generation arguments – saying ‘Let’s just wait and over time … the generations will remove all these things,’” Faas said. “If anything, the third generation is actually worse again than the second.”

While initiatives such as integration courses introduced in 2005 and closer assessment of children’s language skills have helped, the single solution experts consistently mention isn’t a government programme but rather a change to the schooling system. At present, children in most states are channelled at the age of just 10 into Hauptschulen, Realschulen and the elite Gymnasien.

Immigrant children, who often get off to a poor start in primary school, often get put into the lower Hauptschule. In high-immigration areas of cities such as Berlin and Hamburg, that means they may have little contact after the age of 10 with better-performing children, including German children who have superior language skills.

“The German school system decides too early which path children will take … Right away children from immigrant backgrounds are disadvantaged here, because many achievement problems depend on language deficits in the schools,” said Klaus Bade, head of the Advisory Council of the German Foundation for Integration and Migration.

What’s more, the system can compound the damage wrought by the school system’s own low expectations of immigrant children, Bade said.

“Teachers often don’t give even well-qualified children from immigrant backgrounds a recommendation to attend Gymnasium because they don’t think the child has any chance at a Gymnasium without parents who support their education,” he said.

Allotting school spots later would mean the under-achieving immigrant children would have more exposure – and positive influence – from better-performing students. There have been some steps towards Gesamtschulen (comprehensive schools) or at least mergers of the lower two tiers. But the politics are tricky, because German parents of high-achievers don’t want their children held back.

This was demonstrated in Hamburg this year when voters rejected a referendum to extend primary school, in which all students are kept together, from four to six years, meaning they would not be assigned to schools until age 12. That referendum result has all but killed the idea of reform in many parts of the country.

A model for success

Whether it is other students, parents or teachers, underachieving immigrant children urgently need better role models, experts agree. One option is more immigrant teachers, said Daniel Faas. While nearly one in five students has a foreign background, barely one in 10 teachers does.

“There is a huge imbalance between mono-cultural staff and the highly diverse student populations,” he said. “You see much more diversity in the teachers’ common rooms … in London than you do in Stuttgart. If you have no role model in the schools, it’s very difficult.”

Education consultant Mona Kheir El Din adds: “There are discriminating features such as teachers not being able to work with a headscarf. That’s a wrong signal. It is a must to have teachers like that because for a young girl, they are a role model. This is something that has to change.”

After plenty of wake-up calls – including an appearance before a judge who told him he was going to wind up in jail unless he changed his ways – Joshua Lupemba scraped through school with a Hauptschule qualification.

Fortunately, he also had enough self-confidence to overcome life’s setbacks and take on new challenges. Lupemba played football with the now-professional Boateng brothers, with whom he shares Ghanaian heritage, and has started businesses in the arts and entertainment. Now, he has a Bible-studies degree from a US college and has been ordained as an Evangelical pastor.

He uses his various roles to act as a mentor to children who are on the wayward path he once found himself on, including visiting schools to encourage immigrant children to study.

“I’ve done okay without a good school education,” he said. “But I don’t want other children to think they can do without school. They need an education.”