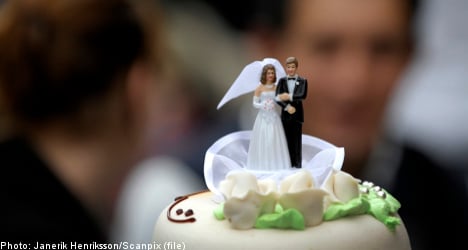 Lena Hane and Peter Stenberg of Djurås in central Sweden had an “ordinary Swedish wedding” on July 10th at Rättvik Church, 45 kilometres north of Djurås.

Prior to the wedding, the couple ensured everything was in order. They applied for and received an inquiry into impediments to marriage (hindersprövning), met the minister and booked the church.

“We checked everything we had to check. We got married in a church,” Hane told The Local.

After the wedding, Hane called the Swedish Tax Agency (Skatteverket) several times to check on the status of the paperwork because she wanted to change her name and take her husband’s. Initially, she was told it could take up to seven to eight weeks because people were on vacation over the summer.

On Tuesday, Hane learned that the minister, Ingemar Bergmark, had, unbeknownst to him, lost his right to officiate at marriages after the rules for church weddings changed on May 1st.

“We are not married in the eyes of the law. I did everything right. I didn’t have to check if he has the right to marry. The only thing I had to do was get the inquiry into impediments to marriage and book the time,” said Hane.

The changes took place after the Church of Sweden decided to allow same-sex marriages last October. Consequently, the rules changed so that every single pastor in the future had to have the individual right to perform marriages. Previously, it was enough to simply be a pastor Church of Sweden.

Unfortunately, the list of pastors that was used to bestow the new rights dated from 10 years ago, when the church separated from the state, and did not include retired ministers, including 77-year-old Bergmark.

The problem has surfaced on a larger scale and lawyers at the Legal, Financial and Administrative Services Agency (Kammarkollegiet) are now investigating the situation.

Hane has no idea how long it will take for her marriage to become legal or whether she and Stenberg will have to marry again.

“I am not the only one. He has married others this summer. The Swedish church just missed him because he’s retired,” said Hane.

Hane, who works as a caregiver for palliative cancer patients who want to die at home, now worries about her legal status in case anything happens to her or Stenberg.

“If I die, will the laws apply? We have two children each that we are responsible for,” she said.

She bears no ill will towards the pastor nor the church, neither of whom she has spoken to since discovering the mistake.

“I want to get my driver’s license, but I can’t do anything. I’m just hoping this will be all right and we can go on with our lives,” she said.