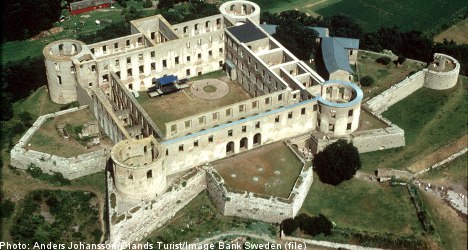 No one in Borgholm municipality, located on the north end of the island of Öland off Sweden’s southeastern coast, had given any thought to Aina E. Johnson until officials at the municipality received an unusual notification this spring.

“We were contacted by an American lawyer who gave us a copy of a man’s will,” Caroline Johansson, who works in the Borgholm municipality finance department, told The Local.

The bequest comes from a man who went by the name John P. Johnson and who had allegedly been born in Sweden but lived near Boston on the United States’ east coast until he died in January of this year.

In Johnson’s will it stood that Borgholm municipality was entitled to part of his inheritance in order to create a fund “in memory of Aina E. Johnson”.

“We thought it might be some sort of scam, so we didn’t think much of it at the time,” said Johansson.

But the story took another twist earlier this autumn when Borgholm officials received some more unexpected news from another lawyer.

“An attorney based in Gothenburg called and said, ‘I have a check here waiting for you.’ It was quite a surprise,” said Johnasson.

The lawyer explained that he had been tasked with distributing money from Johnson’s will to organisations in Sweden and that he had a check in his hands made out to “Borgholms Kommun” for $58,000.

Borgholm officials suddenly realised the bequest was no joke and immediate set out to learn as much as they could about the generous benefactor, as well as the woman in whose memory the money was donated.

It turned out that John P. Johnson was actually born Per-Olof Johnson in Gothenburg in 1909, but emigrated to the United States in 1924.

“His parents were divorced and he had a rough childhood, from what we understand. He supposedly emigrated to the US to live with his father, but they never found each other,” Johansson explained.

“He ended up living with an aunt. He really had nothing.”

Over time, according to Johansson, John P. Johnson had also managed to transform himself from a penniless immigrant teenager to a successful economist.

But the question of why Borgholm had been chosen to receive the money remained unclear until researchers unearthed records indicating that Aina E. Johnson had been born Aina Edith Kristina Andersson in the village of Köping in Borgholm in 1914.

She subsequently emigrated to the United States in 1929.

The two Swedes eventually found each other in the US and fell in love.

“They were married for 40 years,” she said, adding that the couple never had any children, however.

There remains some dispute about whether or not the couple ever visited Sweden during their years together.

“Some information indicates that they spent their summers in Borgholm, but others say that the couple never returned to Sweden,” said Johnasson.

“All we know is that they wanted to give something back to their hometowns.”

Johansson also said that the size of the bequest may be bigger than originally expected.

“We’ve received one check for $58,000 and I’ve learned that another one is on the way,” said Johansson.

However, she was reluctant to put a final figure on the total amount of money Borgholm may end up receiving from the bequest.

In addition to bequeathing money to Borgholm, John P. Johnson also left money to the Göteborgs kyrkliga stadsmission, a religious charity based in Gothenburg.

While Johansson and her colleagues are excited about the unexpected gift, they remain uncertain about what to do with it.

“When you get such a substantial and generous gift, you feel a huge responsibility to do something good with it,” she said.

The problem, explained Johansson, is that no one really knows anything about Aina E. Johnson, which makes it difficult to know what would be an appropriate way to honour her memory.

“We want to get a better idea of who she was, what her interests were. Did she care about children? Did she like music?” said Johansson.

“We just don’t know much about her.”

Many of the details known about John P. Johnson come from a woman whom he knew at the Boston-area nursing home where he spent his final years. But the acquaintance only came to know Johnson after his wife had died and thus has few details about Aina E. Johnson.

Johansson appealed to members of the Swedish-American community who may have known the Johnsons to contact Borgholm municipality with more information.

“Hopefully there is someone in the United States who knows something about Aina,” she said.