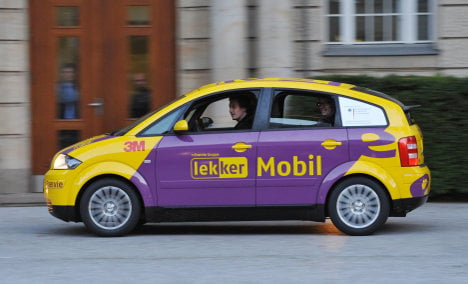 The yellow and purple Audi A2 car took around seven hours to complete the 600-kilometre (372-mile) stretch and arrived in the sumptuous courtyard of the Economy Ministry in Berlin just before 8:00 am local time.

“If any journalists want to charge up their iPhones, we still have some electricity left,” quipped driver Mirko Hannemann, 27, as he stepped out of the four-door car to show off the battery.

Economy Minister Rainer Brüderle welcomed the team on arrival and was even tempted into taking a spin around the courtyard, although not behind the wheel.

“They even had the heating on. It really was a luxury journey,” Brüderle told a large crowd of journalists and photographers on a chilly Berlin morning.

At a later press conference, Brüderle said: “Welcome to a world record. Before, electric cars could typically only go 60 or 70 kilometres before recharging. This is a technological leap forward.”

Car manufacturers hope that electric cars will grow to dominate the automotive industry but consumers see the short range of the vehicles as a major downside.

Japanese researchers have driven an experimental electric car more than 1,000 kilometres around a track, but the two German firms, lekker Energie and DBM Energy, said their vehicle was the furthest travelled by an everyday car.

Chancellor Angela Merkel’s government aims to have one million electric cars on the road by 2020, but Germany’s car giants have been slow off the starting grid and are now scrambling to catch up with their Asian rivals.

Luxury carmaker BMW and Europe’s biggest manufacturer Volkswagen have both said they intend to launch their first vehicles in 2013.

In contrast, last week, Japan’s Nissan said it had started mass producing its Leaf electric car and is poised to put it on sale both at home and in the United States.

Nevertheless, Berlin has offered sweeteners to jump-start its national champions and hopes that by 2050, gas-guzzlers could be a thing of the past.

“Let the message go out to the world. Germany is again a technological leader,” said Brüderle.