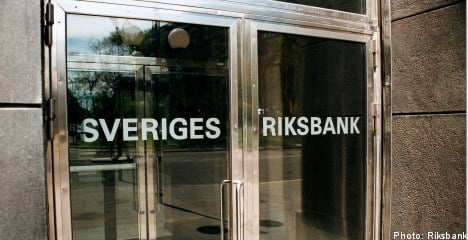 “The Swedish economy is growing rapidly. Inflationary pressures are low, but are expected to increase as economic activity strengthens,” the Riksbank said in a statement.

The Riksbank added, however, that it doesn’t expect to raise rates much “in the coming years” due to “weak developments overseas”.

The move marks the third consecutive boost for Sweden’s benchmark interest rate, bringing it back to a level not seen since April 2009 when the Riksbank halved rates from 1 percent to 0.5 percent.

In explaining its decision to raise rates by a quarter-point, the Riksbank said that Sweden’s economy is “developing well”, displaying positive signs in terms of public finances, household savings, and consumption. Employment has also picked up rapidly as a result, according to the Riksbank.

But the Riksbank also argued that economic uncertainty abroad needed to be taken into account.

“The recovery will take time in the United States, while the major fiscal policy tightening measures in several European countries are dampening growth in Europe. The slow recovery of these countries is leading to moderate inflationary pressures and low international interest rates,” said the bank.

Questions about the pace of economic recovery overseas also led the Riksbank to lower its forecast for how Sweden’s repo rate may be adjusted in the future.

“All in all, developments abroad, together with the low inflationary pressures prevailing in Sweden during the forecast period, argue against the need to raise the repo rate as rapidly in the coming years,” said the Riksbank.

The Riksbank now projects the repo rate to reach 1.3 percent in the first quarter of 2011, compared with a previous forecast of 1.4 percent.

By the final quarter of 2011, the bank expects Sweden’s benchmark rate to reach 2.0 percent, down from the 2.4 percent included in earlier forecasts.

A year later, at the end of 2012, the repo rate is expected to climb to 2.9 percent, compared with an earlier forecast of 3.3 percent.