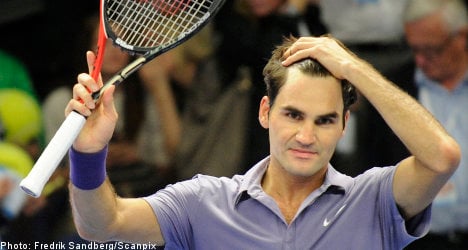 Hopes of a potential elite final between the tournament’s top two evaporated as Söderling fell against German outsider Florian Mayer 7-6 (10-8), 6-1.

Federer’s patchy game in the first set was unrecognisable from the powerhouse comeback which suddenly snapped into place as he trailed a set and 0-2 and which carried him to a 2-6, 6-3, 6-2 victory in just under two hours.

“It was looking pretty bad,” said Federer. “Stan was looking really good. Things were going quickly for me, I had no timing and was shanking balls.”

He added, “He was dominating, it was tough for me to stay in it. But I tried, I got lucky and all of a sudden I was back in the match. I fought my way out of this and I’m excited to be in the semis.”

Mayer, ranked 47th in the world, was stunned by his success over Söderling and at reaching a second season semi.

“It was unbelievable to beat a top 10 player at home, indoors on his favourite surface. In the first set I had no chance on his serve, he could have won it 6-4. But after I won the tiebreak, I could see that he was mentally broken. I took advantage, the last three games of the match were easy,” he said.

Söderling admitted he lost his way.

Söderling will have to wait until his next event to qualify for the eight-man season finals in London next month.

A victory over Meyer would have put the Swede into the field alongside Rafael Nadal, Federer, Novak Djokovic and Andy Murray.

“My timing was not fully there and at the same time, he played very well,” said the two-time Roland Garros finalist. “I didn’t come up to standard today. I was a bit early on my backhand all evening.”

“I’ve had a great run since New York, I’m feeling very confident with my game. I knew it would only be a matter of time. I’m a truthful guy and I say what I mean – I knew that sooner or later things would turn,” said Nieminen.

Federer’s victory gave him his 50th win of the season, the first player to win that many for nine straight years since Pete Sampras completed the feat in 1998.

Ljubicic lost the opening set, but took the second on a double break and went up an early break in the third to finally post his 23rd win of the season against 16 losses.

“I had some chances in the first set which I didn’t manage to take,” said Ljubicic. “But I know Ivan’s game well, and there is nothing that I can do on court that he had not already seen.

“I’m just happy to be in the semi-finals. It will be great to play Roger, as we’ve not played in an official match in two years.”