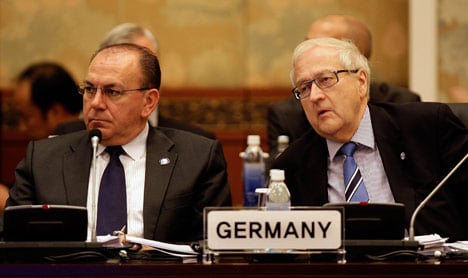 While attending a Group of 20 ministerial meeting in South Korea, Brüderle warned against “falling for planned economy thinking” long favoured by communist nations.

US Treasury Secretary Timothy Geithner on Friday urged G20 nations running big trade surpluses such as Germany and China to alter their currency regimes for the sake of global growth.

In a letter addressed to other finance ministers attending the talks in South Korea, Geithner said nations should aim to reduce their surpluses or deficits to a certain share of gross domestic product in the coming years.

G20 nations with large deficits – like the United States – should boost national savings via “credible medium-term fiscal targets” and boost their exports, he said in the letter.

He also said G20 countries should commit to refrain from exchange-rate policies designed to achieve competitive advantage by either weakening their currency or preventing appreciation of an undervalued currency.

The letter did not name any specific countries, but the United States is angry at China’s policy of keeping a lid on the yuan’s value to benefit Chinese exporters, and his proposals appeared squarely aimed primarily at Beijing.

But Brüderle’s comments made clear Berlin would not support Washington’s initiative. Japan, another big exporter, also called the proposal unrealistic.

German officials have repeatedly rejected US attempts to focus on its hefty trade surplus, saying America should instead try to mimic successful German economic policies. However, Germany’s biggest trade partner France has also criticized the Germans for having a large surplus, arguing they were prospering at the expense of other nations.