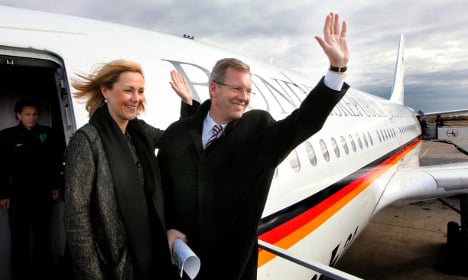 President Wulff and his wife on a recent trip to Russia. Photo: DPA

The first German president to visit Turkey in a decade, Wulff will arrive late in the evening and meet with President Abdullah Gül and Prime Minister Recep Tayyip Erdogan on Tuesday before he gives a speech in the Turkish parliament.

His visit comes just days after Chancellor Angela Merkel weighed in for the first time in a heated debate on immigration, saying that Germany’s attempt to create a multi-cultural society had failed completely.

“Multikulti,” the concept that “we are now living side by side and are happy about it,” does not work, Merkel told a meeting of younger members of her conservative Christian Democratic Union (CDU) party.

“This approach has failed, totally,” she said, adding that immigrants should integrate, learn German and adopt German culture and values.

Germany has four million Muslims among its 82 million inhabitants. Turks form the largest ethnic minority with a 2.5-million-strong presence. While many later generation Turks have integrated with German society, large sections have never learned German and live in closed communities.

In a speech this month, Wulff said Islam was “now part of Germany” but also urged his countrymen and immigrants to make an effort at integration.

In a weekend newspaper interview, Turkey’s Gül also urged Turks living in Germany to master the language of their adopted country.

“When one doesn’t speak the language of the country in which one lives that doesn’t serve anyone, neither the person concerned, the country, nor the society,” Gul told the Süddeutsche Zeitung.

“That is why I tell them at every opportunity that they should learn German, and speak it fluently and without an accent. That should start at nurseries.”

Although traditionally strong, Turkish-German ties have been overshadowed by Merkel’s opposition to Ankara’s bid to join the European Union.

Along with French President Nicolas Sarkozy, Merkel argues that the mainly Muslim country of more than 70 million has no place in Europe and should settle for a “privileged partnership” instead of full membership – a proposal that Turkey categorically rejects.

Wulff’s visit will also take him Wednesday to Kayseri, a booming industrial city in central Turkey, and then to the nearby Cappadocia region, famous for its cone-shaped rock formations, rock-carved underground cities and early Christian churches.

On Thursday he will go to the southern town of Tarsus, the birth place of Saint Paul, to visit the historic Saint Paul’s Church.

He will then fly to Istanbul, Turkey’s cultural and economic hub, where he will meet Ecumenical Patriarch Bartholomew I, the spiritual leader of the world’s Orthodox Christians, on Friday.

Wulff will tour the city’s historical sites and lay the foundation of the Turkish-German university before leaving.