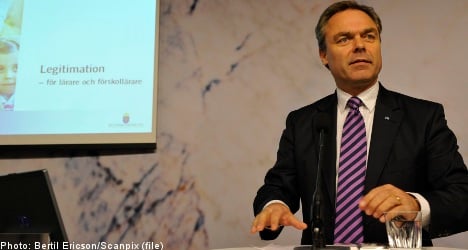 Only qualified teachers will be able to find permanent employment and receive certification, according to a proposal unveiled by education minister Jan Björklund outlined on Monday.

To become licenced, a teacher must have graduated with a teaching degree and undergone an introduction period of at least one year.

One in five teachers in Swedish schools currently lack qualifications to teach. However, half of them have permanent positions and will be able to keep their jobs, according to Björklund.

“One must respect labour laws. However, since they no longer grant certification, it puts pressure on municipalities to provide them with training so that they become licensed,” he says.

When the licencing system is introduced, it will also force municipal authorities to find qualified teachers, Björklund believes.

“It may be cheaper now to employ unlicenced staff, which may affect how much effort municipalities put into hiring. We will change this when we increase demands,” he said.

The proposal would grant a three-year transitional period for schools with a large number of unlicensed personnel to minimise the number of potential problems they could possibly face.

During that time, the schools will be able to train the unlicenced teachers.

The government’s aim is that the new licencing system will elevate the status of the teaching profession, which will entice more people to want to work as teachers.

“There is currently a teacher shortage, particularly in scientific subjects, because it pays better to work in industry,” said Björklund.

The government’s proposal to establish a teacher licencing system was also welcomed by the political opposition.

However, Damberg emphasised that it wanted to ensure that there are sufficient quality demands made in the first induction year for new teachers.

“We will examine this part of the reform in particular,” he said.

He also indicates that the Social Democrats want to see a broad bipartisan agreement on key elements of school policy.