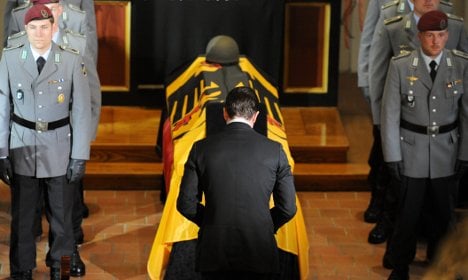 The minister was among some 600 mourners at the memorial in the Lower Saxon city of Selsingen for 26-year-old medical Staff Sergeant Florian Pauli, who died in a Taliban suicide attack in Afghanistan on October 7.

Pauli, who was from Halle an der Salle, belonged to the Seedorf-based paratrooper Battalion 13. Fourteen of his fellow soldiers were also injured when a suicide bomber disguised as a farmer approached them in the Afghan province of Baghlan, blowing himself up.

Guttenberg addressed the mourners in a speech that was described as personal, condemning what he called “perfidious and cowardly violence” by the Taliban.

“He fell for our country,” Guttenberg said, standing in the same spot from which he gave another funeral address for three Bundeswehr soldiers killed in April. On that day he broke a German taboo, calling the Afghanistan conflict a “war.”

Germany needed to be “open and honest” about the real situation in Afghanistan, the minister said.

“We must readdress each day whether we are doing enough to protect our soldiers,” he added.

Guttenberg also called for the German public to offer more support and recognition for the sacrifices of Bundeswehr soldiers.

Since Germany joined the NATO operation in Afghanistan in 2002, 44 Bundeswehr soldiers have been killed. There are currently 4,885 German soldiers there, serving mainly in the northern part of the country.