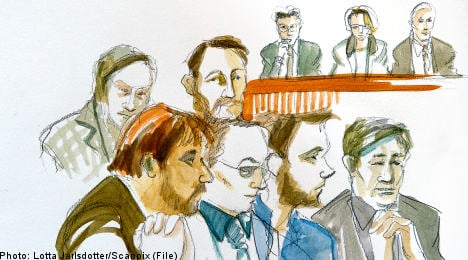 “Whenever new technology emerges, large corporations especially always say the new technology is life-threatening. And it is the technology the prosecutor is after in this case,” defence attorney Peter Althin insisted on the last day of the trial on Friday.

His client, 32-year-old Peter Sunde, was along with co-founders Fredrik Neij, 32, and Gottfrid Svartholm Warg, 25, found guilty in April 2009 of promoting copyright infringement with their website The Pirate Bay.

The verdict, considered an important symbolic victory for the movie and recording industry, handed the three founders along with an important financier of the site, 50-year-old Carl Lundström, sentences of one year in prison.

They were also ordered to pay 30 million kronor ($3.6 million dollars at the time) in compensation to the movie and recording industry.

Founded in 2003, The Pirate Bay, which claims to have more than 23 million users, makes it possible to skirt copyright fees and share music, film and computer game files using bit torrent technology, or peer-to-peer links offered on the site.

Neij’s lawyer Jonas Nilsson insisted Friday that if the appeals court confirmed the guilty verdict for his client it could potentially threaten the basis for the entire Internet.

“A guilty verdict for Fredrik would imply a threat to other search services on the Internet, like Facebook and Twitter,” Nilsson said at the hearing, which was broadcast live by Swedish public radio.

Lundström’s lawyer Per Samuelsson was even harsher in his criticism of the lower court’s ruling, claiming the guilty verdict against his client was basically illegal.

“The district court’s verdict is a mix-match of circumstantial evidence that has been used to get a guilty verdict without basis in law,” he said, insisting that “Carl has not contributed one molecule” to the promotion of copyright infringement.

“It is clear as day that the prosecutor is wrong,” he added.

Prosecutor Håkan Roswall earlier this week called the district court ruling “extremely solid,” insisting the three founders were still “defying the law” and that Lundström had also been “very involved.”

No appeal was made Friday for Warg, who missed the trial due to illness.

The 25-year-old, who currently lives in Cambodia, has been granted a new, separate trial that will likely begin early next year.

During last year’s trial, the defendants maintained that file sharing services can be used both legally and illegally, insisting their activities were above the law. They vowed to wage a lengthy legal battle and to take the case to the Supreme Court if necessary.

The appeals court verdict is set to fall on November 26.