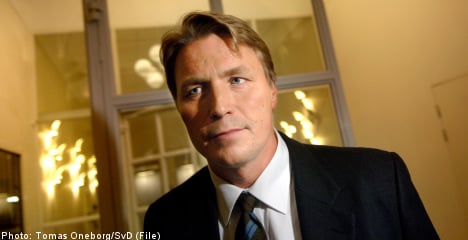 Bodström told the paper that he would have regrets the rest of his life if he didn’t choose to be with his children.

Sahlin told Bodström that she wanted him to remain in politics, but that his family should be his first priority.

Bodström’s wife and four children have been living in western Massachusetts for the past six weeks.

“I’ve spoken with my wife and I don’t want to make my children suffer by giving up this dream. We’ve planned this for such a long time,” he told Aftonbladet.

Bodström explained that many leading Social Democratic colleagues, including former prime minister Göran Persson, under whom Bodström served in the last Social Democratic-led government, advised him to think about his family.

Writing on his blog, Bodström also cited the many votes he received in the recent elections as another complicating factor in his decision. He said he also discussed his situation with Social Democratic colleagues Mona Sahlin, Ulrica Messing, Jens Orback, Mikael Damberg, and others in the party.

“They want me to continue in politics but also say I should think about my family. I’ve obviously also discussed the situation with my wife and children,” he wrote.

“It feels like I’ve made the right decision. My children are becoming more entrenched in their lives here in school, sports, and with friends. If I suddenly yanked them out and broke off their year ahead of time it would have major consequences for them. This is something we’ve planned for a long time.”

On Wednesday, Bodström learned that his request for a leave of absence from the Riksdag had been denied. He had applied to take parental leave from October 4th through December 3rd.

He had traveled to the United States with his family following Sweden’s September 19th general elections, prior to learning that his application for leave had been rejected.

Bodström was disappointed by the decision, arguing that the Riksdag ought to make it easier for politicians to balance work and family.

He explained that taking time off from the Riksdag ought to be easier to manage than in many other workplaces because there are substitute MPs who can easily take over the responsibility of another parliamentarian in the case of an absence.

Instead, he was forced to choose between letting down his family or giving up his seat in the Riksdag.

The Riksdag has strict rules governing leave for elected representatives. According to the regulations, leave requests are only granted for international assignments, illness, or parental leave. And in those cases rules stipulate that the leave be full-time, not only part-time.

However, according to Sweden’s National Social Insurance Agency (Försäkringskassan), Bodström only has the right to part-time parental leave because his youngest son attends school in the United States.

The decision was hard, Bodström told Aftonbladet, but that he received a lot of support from his fellow Social Democrats, some of whom argued that taking time off from the Riksdag could be beneficial.

The decision to give up his Riksdag seat doesn’t necessarily mean that Bodström is giving up politics completely, as he has indicated he will continue working to help the Social Democrats take back power.

“I’m always going to be a Social Democrat and I’m ready to be there if Mona Sahlin needs my support,” he said.

Bodström will be replaced in the Riksdag by 47-year-old Yilmaz Kerimo from Södertälje.

Kerimo, a native of Turkey who has lived in Sweden for 32 years, was first elected to the Riksdag in 1998, but lost his seat following the Social Democrats’ poor showing in the 2010 elections.