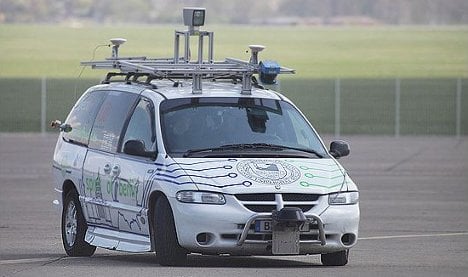 “In the future it will be forbidden for safety reasons for people to drive cars,” predicted Raul Rojas, professor at Berlin’s Free University (FU). “The cars of today are the horses of yesterday.”

“In five to 10 years the technology could be applied in private areas like airports, factories or warehouses. On motorways … in 10-20 years,” Rojas told reporters. “In cities the obstacles could be removed in 20-30 years.”

The car, dubbed the “Made in Germany (MIG)” by the FU, uses cameras, laser scanners, heat sensors and satellite navigation – even in tunnels – to “see” other vehicles and pedestrians and respond to traffic lights.

The technology will sharply reduce the number of cars on the road because people will no longer need their own vehicle so much, using instead driverless cars pooled in car-share schemes, the MIG’s developers believe.

“Autonomous cars are the real ‘green’ cars,” Mexican-born Rojas said. “We could use a fraction of the cars that we now have. If China and India want the same level of mobility as us, then the world is not big enough. The only real solution when it comes to sustainability and preserving resources is car-sharing.”

According to the World Health Organisation, more than a million people are killed in road accidents worldwide every year and 50 million more are injured. Driverless vehicles can slash this, their proponents say.

“Cars that use sensors to recognise other vehicles, pedestrians and bikes will in future drive more safely than people who lose concentration and get tired,” the FU said.

“The car has more information at its disposal than a human does now. A person can only see in front. This car can see in all directions at a range of 70 metres (yards),” said Rojas.

Auto industry analyst Ferdinand Dudenhöffer agreed that the technology could help reduce accidents if it comes to fruition but he is sceptical about the benefits for the environment.

“The various pilot projects around the world look interesting but it remains to be seen whether they will really turn out to be reliable,” Dudenhöffer told AFP, adding: “Climate protection is secondary.”

The MIG, which from the outside looks like a regular Volkswagen Passat with a camera on top, was put through its paces at Berlin’s disused Tempelhof airport on Thursday but it has already been tested on public roads.

A human being was inside – but only for if things went wrong. Nothing did, with the car stopping while a couple with a pram crossed the road, or steering around a parked car – all without human intervention. It is by no means the first self-driving car, however.

Scientists at Germany’s Braunschweig last week demonstrated a driverless car called “Leonie” in real traffic conditions, while other road tests have been conducted in Italy and elsewhere.

US technology giant Google said this week that its driverless cars – but also with a human inside – have already travelled 140,000 miles (225,000 kilometres) around the San Francisco Bay area.

Engineers working with both Google and Berlin’s FU took part in 2007 in the DARPA Urban Challenge organised by the US government, involving driverless cars developed by 35 teams from around the world.

“Back then it was just a competition in California. Now it’s a global race, and this time on real roads with a much greater degree of complexity compared to 2007,” Rojas said.