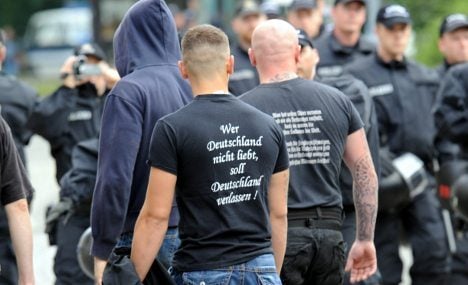 'Those who don't love Germany should leave,' the man's t-shirt reads. Photo: DPA

The poll, presented in Berlin by the Friedrich Ebert foundation for political education (FES), showed that xenophobic views are taking a greater hold among the German public than previously.

The 10 percent who wanted a “Führer” said that this person should “govern with a hard hand for the good of Germany” and believed a dictatorship to be a “better form of government.”

One quarter of people questioned said they longed for a “strong party” that “embodies German society.”

More than 30 percent agreed with the statement, “foreigners come to abuse the welfare state,” said the FES, which is backed by the centre-left Social Democrats.

Even more people – 31.7 percent – said that in a limited job market “one should send foreigners back home,” and that too many immigrants put Germany in danger of being “overrun” (35.6 percent).

Anti-Islam views were particularly strong in the FES poll, which surveyed 2,400 Germans aged between 14 and 90.

Just over 58 percent said that “religious practice for Muslims in Germany should be seriously limited,” and that number rose to 75.7 percent for people from former East Germany.

Leipzig-based study authors Oliver Decker and Elmar Brähler called their findings an “alarm signal for politics and society,” saying the right-wing extremist views had multiplied during the financial crisis. People who promote such views could use the situation to “gain political capital,” they warned.

The study, entitled Die Mitte in der Krise – Rechtsextreme Einstellungen in Deutschland 2010, or “The mainstream in the crisis – Right-wing extremist attitudes in Germany,” also showed that older and less-educated Germans were most likely to be intolerant.

Still, the phenomenon is not confined to the “fringe” of society, FES spokeswoman Nora Langenbacher said. Instead right-wing extremist views are found in “worrisome amounts within mainstream society,” be it eastern or western Germany, men or women, young or old, members of democratic parties, or churchgoers.

“This development is most likely linked to the effects of the economic crisis,” the study said, adding that this meant not only an ongoing increase in the acceptance of right-wing extremist views, but also a measurable change in Germans’ relationship to the economy.

“Beliefs in an ethnic community with a common destiny are making themselves apparent, for example in distinguishing between ‘foreigners’ who bring ‘us’ something, and those who present a burden for the ‘common good’,” the study concluded.

The study results come as the debate over immigration and integration reaches a fever pitch in Germany. Since June, Thilo Sarrazin has made a number of anti-immigrant statements aimed mainly at Turks and Arabs, coinciding with the publication of his controversial book Deutschland schafft sich ab – Wie wir unser Land aufs Spiel setzen, or “Abolishing Germany – How we’re putting our country at jeopardy.”

While many politicians have condemned Sarrazin’s position, polls have shown that public support of his views is growing. In early September a poll conducted by Emnid for daily Bild revealed that 18 percent would vote for a party headed by Sarrazin, who was forced to resign from his Bundesbank position over his hot-button views.

But since then, several conservative politicians have been emboldened to make similar remarks, the latest being Bavarian state premier Horst Seehofer, who over the weekend suggested a ban on immigration for Turks and Arabs because of their “difficulties” with integration.